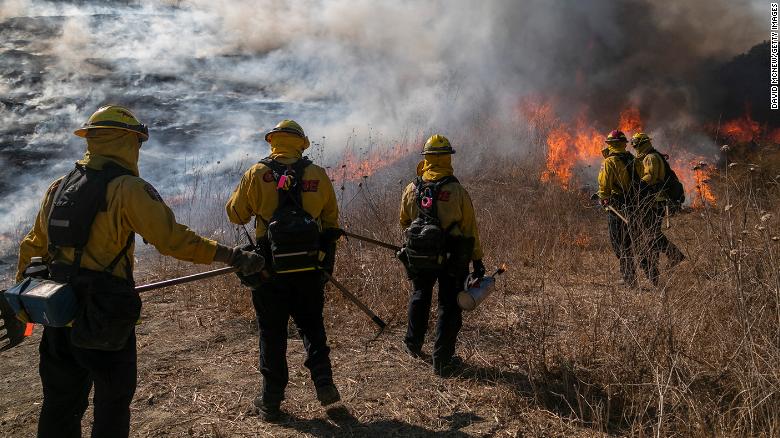 Firefighters set a backfire to protect homes and try to contain the Blue Ridge Fire.

Mandatory evacuations have been ordered for approximately 70,000 residents in Orange County, Calif., as firefighters continue to battle two new wildfires — the Silverado Fire and Blue Ridge Fire — which grew to nearly 30,000 acres combined in less than 48 hours, according to CNN.

The fast-moving fires, fueled by high winds and low humidity, increased quickly since Monday (Oct. 26), damaging at least eight homes and threatening thousands of others.

The newest fires add to an already historic season in Southern California that has seen 4.1 million acres scorched. Thirty-one people have died, and 10,000 structures have been destroyed or damaged in the state, according to Cal Fire.

In Colorado, the two largest wildfires in state history have burned more than 400,000 acres in the last few weeks.

As of late Tuesday night, the Blue Ridge Fire in Orange County’s Yorba Linda had charred 14,334 acres, according to an update from Cal Fire. No containment has been reported.

The update said that seven structures were damaged, and one was destroyed in the blaze, which is also threatening more than 20,000 other structures.

Extreme fire weather in the area, including high winds between 30 to 50 mph pushed the flames into Chino Hills, northeast of Yorba Linda, on Tuesday.

Winds are forecast to weaken overnight to between 20 and 25 mph, and firefighters are hoping to use that time to build containment lines around the fire, Cal Fire said in the update.

About 20 miles south, the Silverado Fire has burned 13,354 acres near Irvine since early Monday morning, a Cal Fire incident update said late Tuesday night. The cause of the fire is under investigation and is 5% contained.

No structures have been lost or damaged, according to Cal Fire, and more than 1,200 fire personnel are working on the blaze.