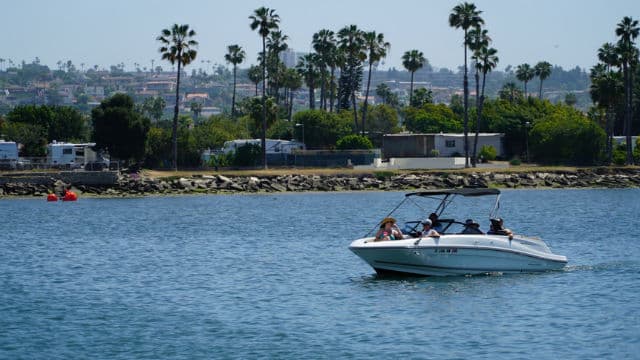 Campland on the Bay

The San Diego (Calif.) Audubon Society said Thursday (Oct. 10) it has reached an agreement with Campland on the Bay to minimize the impact of the popular campground’s expansion on Mission Bay over the next five years, according to the Times of San Diego.

The agreement requires new RV sites be kept as far away from the bay front as possible on the east side of Rose Creek. This will prevent interim development in the area, leaving the potential for future restoration of natural wetlands.

On June 24, the San Diego City Council approved a five-year lease extension for Campland, noting that wetlands restoration could not begin for at least that time period. The short-term extension requires removal 167 dilapidated mobile homes from De Anza Point, remodeling of a nearby clubhouse and new landscaping, but also allows an increase in RV sites.

“We applaud Campland and the city for agreeing to site all new RV infrastructure as far from the site of projected sea level rise and future wetlands as possible,” said Andrew Meyer, conservation director with San Diego Audubon. “We’ll continue to advocate for meaningful, sustainable wetland restoration, like our ‘Wildest’ proposal in northeast Mission Bay, to improve the diversity and abundance of resident and migratory bay-dependent birds.”

Audubon has agreed not to challenge the project’s Coastal Development Permit on the basis of new RV sites — provided those RV sites are placed in agreed-upon areas as far removed from the bay front as possible.