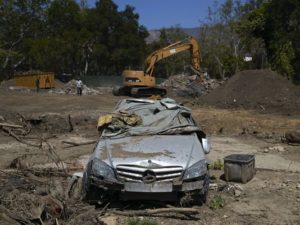 A mangled car sits in a neighborhood devastated by a mudslide, in Montecito, Calif. Months after the mudslides nearly wiped the small community of Montecito off the map and killed multiple people, those who survived are still looking for and finding their belongings in the deep and hardened sludge.

Authorities say Californians are now at greater risk of flooding and debris flows during this winter’s storms because of the many wildfires that have scorched vast areas of land, according to the Ventura County Star.

The announcement was part of California Flood Preparedness Week.

The state’s Department of Water Resources says more than 7 million California residents are at risk of flooding.

Experts say post-fire floods are a greater risk to homes down slope from scorched areas because the ground cannot absorb the water, which picks up ash, topsoil and debris as it flows downhill.

“We have to recognize that there’s still tremendous potential for the death and destruction that we experienced less than a year ago,” said state Sen. Hannah-Beth Jackson, a Santa Barbara Democrat who represents part of Ventura County. “Every person needs to have a plan. What if?”