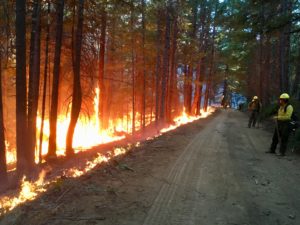 With more than a dozen active wildfires spread throughout the entire state, California campground owners are dealing with billowing smoke and the ominous threat in some cases that life-threatening flames might turn their way.

Through Aug. 5, officials from the California Department of Forestry and Fire Protection (CAL FIRE) said that the state has dealt with 3,981 fires, which have burned more than 600,000 acres. It surpasses the 3,662 fires during the same period in 2017, which burned slightly more than 200,000 acres.

The largest fire in the state’s history that has engulfed Mendocino County and surrounding areas (Mendocino Complex Fire) has burned more than 300,000 acres and is now 52% contained. CAL FIRE officials said the blaze may burn into September.

Debbie Sipe, executive director of the California Association of RV Parks and Campgrounds, told Woodall’s Campground Management (WCM), that firefighters have been taking stands at some parks and that private campground owners have been “pretty lucky” as far as realizing any structural damage to their campgrounds.

However, a National Park Service facility operated by a private concessionaire, a walk-in campground called Oak Bottom Marina in Redding, Calif., reportedly sustained significant damage from the Carr Fire, now 49% contained. Most of the park, with 94 walk-in and 22 dry RV sites, has reportedly burnt to the ground while some boats docked in the water were “melted.”

“I am concerned that maybe I am not aware of other park owners that have experienced losses,” she noted. “Overall, besides just the damage factor, tourism has definitely been impacted. Officials from the Mariposa County Visitor’s Bureau, which represents an area affected by the Ferguson Fire, said they have been losing $300,000-a-day due to the impact of the fires.”

Sipes said that the smoke in many areas of the state has doctors warning people to stay inside and to limit their exposure to the outdoor air.

“We are expecting a low-pressure system to bring in some sea breezes and hopefully clear out some of the smoke in areas of the state, but of course that doesn’t bode well for states east of us,” she explained. 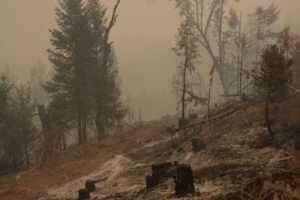 On the northern edge of Redding, the Carr fire came within 10 miles or so of Lawndale Lodge and RV Resort, causing a slew of cancellations.

”Business is just gone. I got two cancellations today, and I’m down now to three reservations for all of August,” said Linda Klejeski, who has managed the park’s 22 sites for two years.

Two weeks into the fire that ravaged Redding, Lawndale had only two units in the park.

”We got lots of smoke. We had a lot of ash falling all around. I should be wearing a mask, but I don’t,” Klejeski said.

At the 40-site Lakeshore Inn and RV on Shasta Lake in Lakeshore, Calif., about 30 families from Redding sought refuge at the park 10 miles northeast of the city during the height of the fire. Most left as the fire came under control.

”A lot of them were able to get back to where their homes are — or were,” said Ross Marshall, who owns Lakeshore with his wife, Charlotte. ”We’ve had some cancellations and I’m sure this is going to affect me mightily. This is one of the worst fires I’ve ever seen go into an urban interface.”

The threat of the Ferguson Fire, which is now 80% contained, and the increasing presence of smoke has caused reservations to drop at High Sierra RV Park in Oakhurst, Calif., according to General Manager Kathy Frye.

“We were packed in the weeks before the fire started,” she noted. “But now we have quite a few openings.”

The Yosemite Valley, which is located close to High Sierra RV Park, was also forced to close due to the Ferguson Fire. Sipes said the fire had been contained enough that employees and area residents have been allowed back into the Yosemite Valley, although all the smoke continues to keep tourists away.

“We have quite a few campers from Europe that are still showing up and we are directing them to other activities besides Yellowstone,” Frye noted. 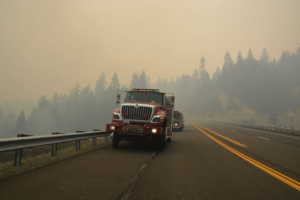 Further down the road in Coarsegold, Calif., an Escapees members-only park, Park Sierra, is safe from the blaze but still battling smoke.

“We are still seeing less traffic mainly because people are traveling further to get out of the area,” she explained.

Sipes said moving forward it is imperative that campground owners in the state develop an emergency response plan and that they train every employee what to do in an emergency.

“Even though the drought is over, we have more than 102 million dead trees here in California and the intensity, and the size of these fires, is changing,” she noted. “As a state we are trying to deal with how we fund firefighting efforts. Our fire fighting budget for the entire year is already spent.

“We are trying to get a grasp on how we function if this is the new normal,” Sipes continued. “This does not impact only the burn areas. With the smoke, the size of the impacted areas is immense.”