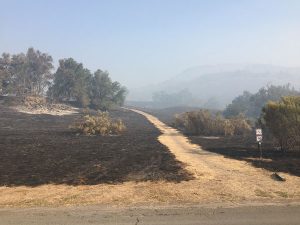 This photo, taken near the entrance kiosk at Sugarloaf Ridge State Park on Monday, Oct. 23, shows a charred meadow on either side of the Pony Gate Trail.

At the end of Adobe Canyon Road, beyond charred remains of homes and burnt trees, a chained green gate wrapped in red and yellow caution tape blocks the road to a now-closed Sugarloaf Ridge State Park in Sonoma County, Calif.

It’s unclear when the park will reopen.

According to Kenwood Press, the story is much the same for other local parks, including Sonoma Valley Regional Park and Hood Mountain Regional Park, which bore the brunt of the catastrophic wildfires that swept through Sonoma Valley in the weeks following Oct. 8.

An estimated 80% (3,511 acres) of Sugarloaf State Park burned, although damage to infrastructure was relatively light. The visitor’s center, the White Barn and the Big Red Barn are still standing. Fire burned to the edge of the campgrounds, but the new bathhouse and four of the six stand-alone toilet facilities survived.

The Robert Ferguson Observatory survived, but the nearby wooden bridge on the Meadow Trail did not.

In the early hours of Monday (Oct. 9) morning, as the Nuns fire was spreading in high winds and authorities found themselves overwhelmed, Sugarloaf Park Manager John Roney, who lives in Santa Rosa, drove up the canyon to evacuate campers and observatory visitors at the park.

He then knocked on doors of residents up and down Adobe Canyon Road, letting people know it was time to get out. After the fire danger passed, park staff returned to collect all the camping gear from the campground. Untouched by the fire, it is now being stored and awaiting return to its owners.