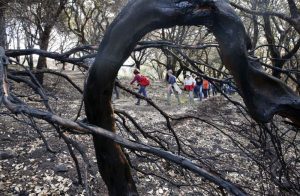 One has only to look to the native coyote bush to see the flora are returning and the ecological cycle is already underway after the wildfires at California’s Sugarloaf Ridge State Park.

“It’s sort of the poor stepchild of every area where it grows, because it’s so common and it seems kind of boring,” said Carolyn Greene, a longtime certified California Naturalist, pointing out new sprouts at the shrub’s base. “But it’s one of the pioneer plants, generally, in environments that comes in first. A week ago there wasn’t new growth on that stem, so that’s happening.

“We will see some ‘was plant,’” she said, referring to those that died in last October’s destructive fires, “but this is definitely an ‘is plant.’ ”

According to The Press Democrat, in a sign of the region’s recovery, the park in Kenwood reopened Thursday (Feb. 1) for the first time in nearly four months, welcoming heavy foot traffic to catch first glimpses of the damage done. Some sections of the regional fixture known for its rolling hills and serene, tree-lined meadows, saw flames 70 feet tall that burned as hot as 1,200 degrees and scorched 80% of the park’s total landscape.

Portions of the well-traversed public lands, established in 1962, remain closed while staff and volunteers continue repairing trails, relaying rebar and rebuilding wooden retaining walls to prevent soil erosion. Of its 16 trails, only 10 are presently open because of the countless hours invested to get them ready, with two of them open to mountain bikes.

Half of the park’s campsites will also be restored Feb. 15, and with them the normal hours of operation returned to 6 a.m. to 10 p.m. instead of the current abbreviated hours of 8 a.m. to 6 p.m.

The rest of the campgrounds are scheduled to open April 15.