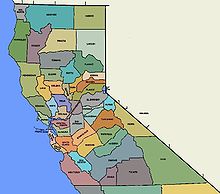 The 48 California counties within a conventional definition of Northern California.

From Mount Diablo in the East Bay hills to the crest of the Sierra Nevada above Tahoe and Yosemite, fire danger has been upgraded to high this week for vacationers, campers and wilderness hikers in California, the San Francisco Chronicle reported.

Rangers, especially in Yosemite National Park and in the Lake Tahoe Basin, are also on “Idiot Alert” for this weekend – watching for those who illegally light fireworks, which are banned in both areas. At Yosemite, as at all national parks, it is illegal even to possess fireworks inside the park boundary.

Many campfire restrictions are being put in place for the weekend at parks, national forests and wilderness areas in Northern California.

Visitor traffic is expected to be high this weekend, he said, and in a warning worthy of many areas across the state, he advised campers to check for updated restrictions on campfires and the required permits for all types of camping. New restrictions have been coming daily across the western United States.

In past years, with low snowpacks in the high Sierra, it has been common for rangers to ban campfires in early July at many wilderness areas and to restrict them elsewhere to fire rings at developed drive-in campgrounds.

The most severe campfire restrictions ordered this week are at campgrounds in the East Bay Regional Park District and in the Lake Tahoe Basin:

Note: All Bay Area parks prohibit smoking on trails, and many prohibit an open flame or smoking anywhere in the park.

Note: A wilderness permit, which usually includes a campfire permit, is required for entry into federal wilderness areas. Campfire restrictions can be posted at any time.