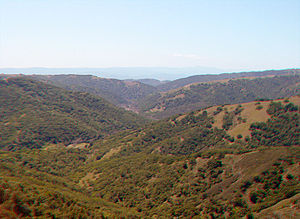 A view of some of the terrain at Henry Coe State Park near San Jose, Calif.

The agreement is the first signed by the California Department of Parks and Recreation under the terms of AB 1478.

The new state law, adopted in September in the wake of a scandal in the department, allocates $10 million for matching grants to keep state parks open, the Sacramento Bee reported.

The money comes from the $54 million in surplus funds that former parks headquarters officials were found in July to have hidden for years, even as state budget cuts led to park closures.

Henry Coe, at more than 87,000 acres of mountain peaks and oak-studded wilderness, is the largest state park in Northern California and the second-largest in the state.