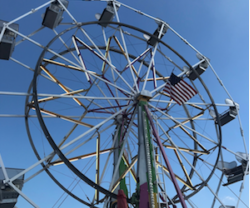 Huge Ferris wheel is a draw at Pomona show

As the 65th California RV Show reached the midway point Wednesday (Oct. 10), organizers are pointing toward another strong-selling event driven by textbook West Coast weather and a buyers market that appears to still have legs.

“I have to say everything is going our way,” said Tom Gaither, western show director for the host RV Industry Association (RVIA), noting Wednesday that attendance was up around 4% from 40,167 in 2017. “The weather is absolutely gorgeous with temperatures in the 70’s compared to the 95-plus days that we experienced last year.

“History shows that when the weather’s nice, people come out,” he added. “The other part of the equation is that dealers are telling us the market is strong — people are still buying RVs. Fortunately, we’re just able to ride that wave.”

Gaither estimated that daily attendance averaged around 4,000 Friday through Sunday while weekday traffic was seeing around 2,000 people per day pass through the gates.

“The great thing about that kind of traffic during the week is that the people coming out are generally retired and are looking to buy,” Gaither told WOODALLSCM.com. “They don’t need to fight the crowds over the weekend. This show has proven to be a great selling event over the years and what I’m hearing from the dealers is that this year is no different.”

Billed as the West Coast’s largest and oldest annual consumer show, this year’s event features about 1.1 million square feet of display space with more than 17 dealers displaying a broad cross section of motorhomes and towable RVs. According to Gaither, toy haulers are one of the hot-selling categories for dealers this year due to their popularity among West Coast Millennials.

“One thing we do at the show is that when a dealer sells a unit in afternoon, we pull it out the next morning so customers can pick it up at the dealership,” he said. “Today, I saw tons of motorhomes coming out, and also a lot of toy haulers.

“I think toy haulers are selling well because of all the Millennials coming into the industry,” he noted. “They like to get unplugged and toy haulers offer them that freedom to get off the grid. A big thing happening on the West Coast is that a lot of Millennials are choosing to work in their RV versus sitting in the office. I think that trend is really driving the toy hauler market in California.”

The show also offers a full slate of educational opportunities along with special attractions like the giant Ferris wheel located in the middle of the show along with appearances by guest celebrities.

“(LA Dodger great) Steve Garvey was here signing autographs and REV will be hosting racecar driver Josef Newgarden at their display on Saturday,” Gaither said. “We have a two-piece band this afternoon, and archery expert Frank Addington Jr. also performed. It just adds another element to the show.”