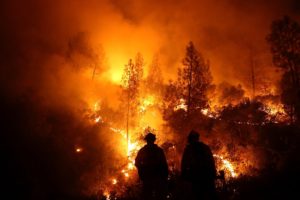 More firing operations once again raised the acreage total on the Mendocino Complex on Sunday (Aug. 26), with the Ranch fire portion surpassing the 400,000-acre mark, according to the Lake County News.

On Sunday night, the complex reached 450,985 acres with containment up to 83%, Cal Fire said. That’s a growth of more than 23,000 acres since Saturday night.

The Ranch fire reached 402,065 acres, with containment remaining at 67%, Cal Fire said. The River fire has been fully contained for nearly two weeks at 48,920 acres.

Mapping shows that the footprint of the Ranch fire continues to grow toward the northern Lake County border into western Glenn County, several miles southwest of Elk Creek.

Cal Fire, which is managing the eastern zone of the Ranch fire, said firefighters continue to make good progress on the Ranch fire, where increased acreage was due to firing operations in the northeastern areas of the fire.

Firing operations are expected to continue on interior portions of the burned area focusing on reinforcing containment in the northeastern areas of the fire as weather conditions permit, officials said.