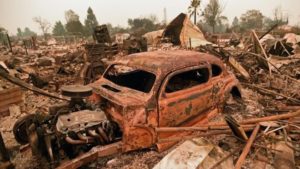 The Carr Fire has burned through an area larger than the city of San Francisco.

California’s deadliest current wildfire is getting larger, officials warn, despite thousands of firefighters battling it.

“Erratic winds” and dry conditions have caused the Carr fire to grow early on Sunday (July 29), firefighters said, according to the BBC.

It is one of eight major wildfires currently burning in the state.

The fire, in the Shasta County in northern California, has killed six people so far, including two children and their great-grandmother.

Melody Bledsoe, 70, Emily Roberts, five, and James Roberts, four, died when they were caught in its path as they were about to evacuate their home in the town of Redding, about 150 miles (240km) north of Sacramento, on Thursday. An unidentified fourth body was found in a burnt-out house on Sunday.

Two firefighters also lost their lives on Thursday. A third firefighter died battling the Ferguson Fire, near Yosemite, on Sunday.

The Carr fire, which doubled in size overnight on Friday, was only 5% contained by Sunday morning. It has already burnt more than 48,000 acres (194 sq km) of land and destroyed at least 500 structures.

It began on Monday. On Thursday it became a firestorm, jumping across the Sacramento River, according to news agency Reuters.

California Department of Forestry and Fire Protection (CalFire) chief Ken Pimlott told reporters they were “seeing fire whirls – literally what can be described as a tornado”.

“This fire was whipped up into a whirlwind of activity” by gale-force winds, he said, “uprooting trees, moving vehicles, moving parts of roadways”.

A total of 38,000 people have been evacuated from Shasta County. California’s Gov. Jerry Brown has declared a state of emergency in the area, as well as three others.

President Donald Trump has approved federal aid for the counties.

The Carr Fire is the largest of eight big fires burning in California, and 90 across the country, according to the National Interagency Fire Center.

There are currently 12,000 firefighters battling the flames across the state.