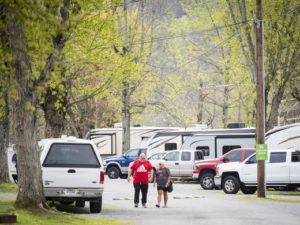 Camp RiversLanding campground in Pigeon Forge on Tuesday, April 3, 2018. The campground is celebrating its 50th anniversary with specials.

Long ago Danny Beck, of Augusta, Ga., usually vacationed in Cherokee, N.C., but one year more than two decades ago he decided to camp in Gatlinburg, Tenn., instead.

On reaching Pigeon Forge; however, he didn’t want to make the rest of the drive. So he stopped at 304 Day Springs Road, a long-established campground now called Camp RiversLanding, according to the Knoxville News Sentinel.

“I pulled in here and just stayed,” Beck said.

He and his wife Rita have been coming back ever since, a week at a time, three or four times a year; one of those trips is usually for their wedding anniversary – from his riverfront campsite, Beck can point to the hotel where they honeymooned 45 years ago – and another is to see the leaves turn in October, he said.

This year those trips coincide with Camp RiversLanding’s 50th anniversary. On three weekends – May 4-6, Aug. 17-19, and Nov. 16-18 – the campground is offering “throwback” rates of $28 per night; that’s about $25 off the usual rate, General Manager Logan Baker said.

Those weekends will also feature live music, free commemorative T-shirts, and birthday cake, with the celebration geared for longtime guests like the Beck family, Baker said.

“It’s just our appreciation for 50 years of successful business,” he said.

When Danny Beck’s children were small, he and Rita brought them along; now it’s their grandchildren’s turn to enjoy Camp RiversLanding, he said as he watched two grandsons jump on a bounce pillow.

The campground has changed over the years, with many added amenities, Beck said. It’s convenient to Gatlinburg, Dollywood, Cades Cove and other attractions, but what keeps him coming back is the family atmosphere, he said. 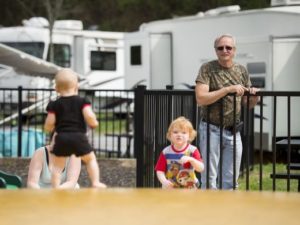 Danny Beck from Augusta, Ga., watches his grandchildren play on a trampoline at Camp RiversLanding campground in Pigeon Forge on Tuesday, April 3. The campground is celebrating its 50th anniversary with specials.

Baker greets Beck and other repeat guests by name as he strolls through the campground, which is already nearly full – the first months of the year are slow, but business picks up sharply as schools let out for spring break, Baker said.

Camp RiversLanding offers 118 campsites, with 36 right on the bank of the Little Pigeon River. With the location comes free fishing and tubing, Baker said.

Originally the campground site was a dairy farm owned by the Broady family. The farmhouse, dating to 1910, is believed to be the oldest surviving house in Pigeon Forge, Collier said. It has recently been remodeled as a three-bedroom rental.

In 1968, Mindle Collier and T.C. Runion bought the land and turned it into a campground, renting out tent sites.

“They also had a skating rink up here as well,” said Baker, Mindle Collier’s great-grandson.

The farm’s original buildings remain, though they’ve been remodeled as an office, game room and event pavilion.