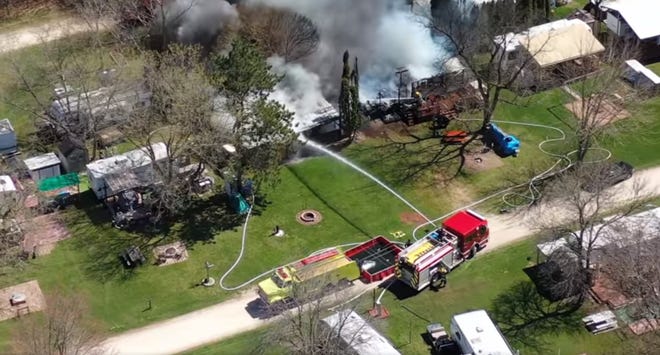 Firefighters work to extinguish a fire at the Huckleberry Acres Campground in New London, Wisc.

Multiple propane tanks exploded as firefighters responded to a fire at Huckleberry Acres Campground in New London, Wisc., on Friday (April 16) afternoon, according to The Post Crescent.

The fire broke out around 12:30 p.m. Friday at Huckleberry Acres Campground, about six miles south of New London. When firefighters arrived, they found four campers, two sheds, and a pickup truck engulfed in fire, according to the New London Fire Department.

While firefighters were on the scene, several 20- to 30-pound propane tanks blew up, causing a loud explosion.

Firefighters were able to keep the fire from spreading to nearby campers. At least two other campers were damaged by heat, according to the fire department.

Meanwhile, the Waupaca Department of Natural Resources put out an unrelated vegetation fire at the south end of the campground. The vegetation fire was a controlled burn that was not out of control, but it was extinguished.

The cause is under investigation, but witnesses said they saw the fire start in one of the small sheds, according to the fire department.