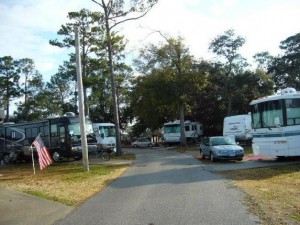 A view taken from the website of the Kessler Family Campground near Biloxi, Miss. A fatal shooting occurred on Sunday in the campground that is used by families of armed forces stationed at nearby Keesler Air Force Base.

Keesler Family Campground near Biloxi, Miss., was not as family-friendly today (Nov. 19) as its name might suggest. A domestic shooting left one person dead and another, an Army veteran, injured.

Officials at Keesler Air Force Base put out a press release stating that the altercation had started around 8:15 a.m. Sunday, exmainer.com reported.

It was believed to be an isolated incident between a former soldier and his estranged wife. Other residents at the campground were not in danger.

Details are limited and sketchy. There has been no information released on the condition of the Army veteran.

According to the Biloxi SunHerald.com:

Keesler officials said an Army veteran, who was going through a divorce, was staying at the park when a domestic disturbance broke out at about 8:15 a.m. Sunday. He was wounded and another person was killed in the shooting. Base officials haven’t yet released the names of the two victims yet.

The Air Force Office of Special Investigations is in charge.