campersAPP allows owners to push notifications to their campers and allows campers to stay informed about what is going on at the park.

To kick off the new year the founders of Quechee, Vt.-based campersAPP are set to launch campersAPP 2.0.

Heather and Travis Gere, both founders of the company, have told WOODALLSCM.com the new platform will include a variety of new features and enhancements.

CampersAPP is a tool that among other things allows owners to set up a park profile, send notifications, activity alerts and other pertinent information, as well as customize what their campers see when they use the app. On the camper’s side, the app can be used to share photos, learn about activities at the park or in the area and order firewood or propane, along with a host of other features.

With the campersAPP 2.0 release the app will become an open network, meaning campers will be able to find parks, receive promotions, find daily vacancies and make reservation request, all on their mobile devices.

CampersAPP 2.0 will offer a number of enhancements to the app’s activities module, explained Heather. She noted that owners can now put activity information in the app, and it will automatically share the information among multiple channels, instead of owners having to post the information separately to their social media pages and on their website.

“I think a lot of our focus has been to create a product that actually works for the campground owner, something that isn’t a burden,” noted Heather. “This will streamline the process and help them save time.”

She said the app also allows owners to advertise their themed weekends or activities, offering a space where an owner can highlight what is going on at their park.

“For example, we have one park that has a petting zoo and they will be able to use that area to feature their animals,” explained Heather. “Other parks can use it to share their activity waivers and different things like that.”

Another exciting aspect of the new platform is the artificial intelligence (AI) chatbot that has been built into it, said Travis. He noted that the AI can act as another employee for an owner, offering answers to questions people may have.

“They could brand their chatbot as a pirate and give him an icon and have it ready when the guest uses the app and has a question,” he explained. “It will give owners another avenue to offer resources and answer questions and really reach their campers on another level.”

The new campersAPP 2.0 will also offer owners a chance to offer QR code games, as well as offer another chance for campers to reach out to park staff through QR codes. Travis noted that there are scavenger hunts and other games that can be created through QR codes. A camper would just pull up their app, scan the code and start playing.

Owners can also leave feedback forms with QR codes around the park — like in bathrooms — that offer campers a chance to scan the code and leave feedback that can be immediately seen by park staff. 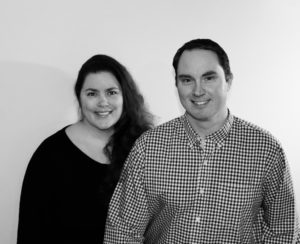 “If a toilet is overflowing a guest could scan that code and let park staff know immediately that there is an issue,” said Travis.

The app is also going to have NFC capabilities, which will give owners the opportunity to have campers pay for firewood or a bag of ice right when they are picking up the item.

“A lot of parks operate on the honor system for things and so, where we can bring a new dimension is putting an NFC tag up where the park’s ice chest or wood is, and the camper can just scan to pay,” Travis explained.

The Geres have also been working to launch SiteTonite along with campersAPP 2.0. SiteTonite will be a part of the app that allows campers who are on the road to find campgrounds or RV parks that have available space. Not only that, but Travis mentioned it will also tell RVers if the available site can meet the needs of their rig.

SiteTonite will also allow campground owners to push deals to travelers looking for a place to stop for the night. The Geres noted that they hope to be able to find places for campers to stay besides parking lots.

“Campgrounds have struggled to make this type of service available because unlike a hotel, every camper has a different house behind them,” noted Heather. “Not everything fits the needs of a particular camper, so if a camper’s driving down the street and they don’t have a plan for the evening, their option is to Google campgrounds nearby or find an app that shows campgrounds nearby and then they have to start calling random parks.

“That is not very efficient,” she continued. “So, what we’re going to be able to do is if an owner has an opening they can advertise it through SiteTonite and if that site matches what the camper needs — meaning that if they are pulling a 19-foot RV and a campground nearby has a site available for a 30 footer — then I’m going to see that deal and I can actually request a booking on demand as I’m driving.”