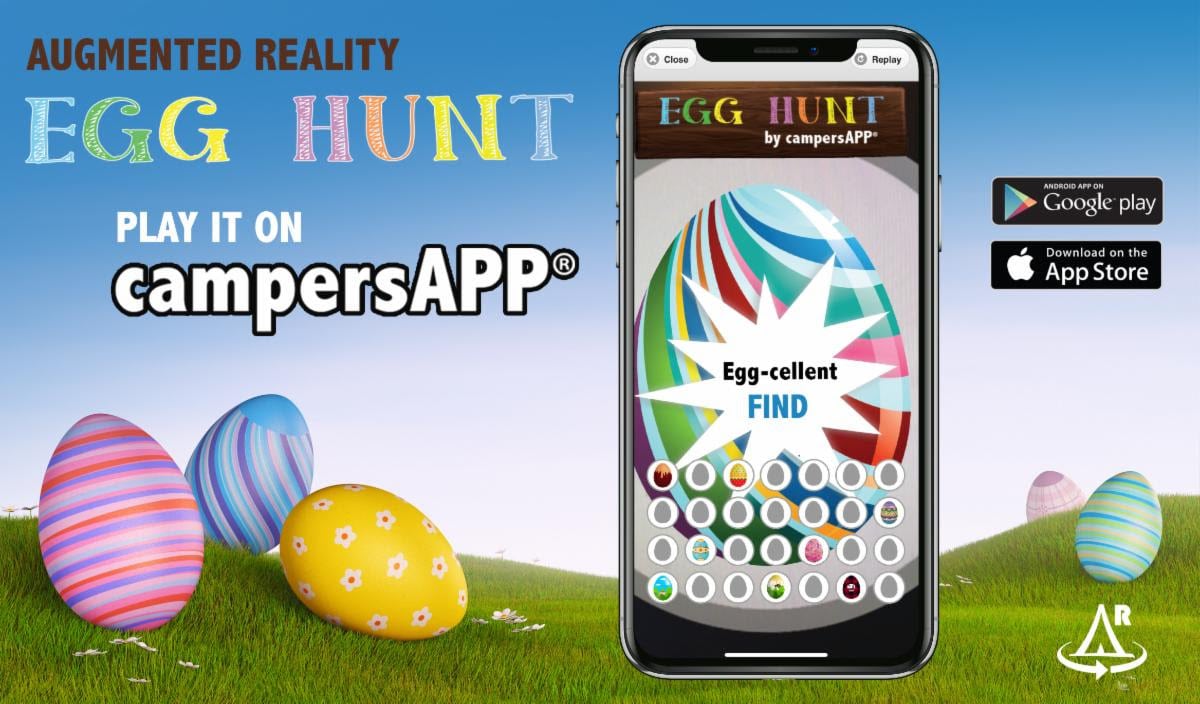 campersAPP has introduced three new augmented reality (AR) experiences that allow campers to enjoy an activity from anywhere, according to a press release.

The first is an Augmented Reality Egg Hunt providing a fun digital twist on the typical egg hunt. This is a free game that any park utilizing campersAPP can deploy. Even if a park is closed, campers can still play it from the safety and comfort of their own space, noted the release. It will provide a great way to engage with campers and introduce them to a park’s app.

How does it work?

Simply print the PDF of colorful eggs and scatter them throughout your park (we suggest laminating for longer use). When scanned, each egg will reveal a fun egg pun, video or 3D pop-up.

Click on the eggs to add them to the digital basket. Once players have collected all 28 eggs, they earn a digital badge. campersAPP is going to make that game available throughout the month of April.

To add the game to your app, just toggle on the feature within your dashboard (located within tools/scavenger hunts). Once activated, the game will appear on your main app menu.

campersAPP has created promotional materials and a PDF of the eggs (small and large versions) that owners can download and share. The larger eggs could be used to launch a town-wide scavenger hunt where families could capture the egg safely from within their vehicles.

“We are excited to see how parks use the game,” campersAPP officials explained.

Owners can tag the company on Facebook and Instagram and it will help direct campers to the park’s mobile app to play.

For the experience, just click on the bunny icon which will appear on the app. Turn slowly in a circle and he will jump into view.

In addition to the egg hunt and the upcoming character visit, campersAPP is also excited to share a new augmented reality campsite builder experience. It is live and located within the games module. This new game makes it possible to create a virtual campsite anywhere.

Campers can simply scan the area they wish to build an AR campsite in and then begin throwing 3D models out into the scene. Some of the items include a camper, tent, trees, picnic table, and even a working campfire. Campers can walk all around their scene and interact with it.

The AR Campsite Builder provides another fun way to engage with campers from a distance, noted the release. One idea might be to launch a contest on Facebook asking campers to take a selfie with their campsite for a chance to win a prize. campersAPP will be adding new elements to this game over time.

If you are not a campersAPP enabled park but would like to join, enter in the code April60 in the referral box and receive a 60 day free trial.