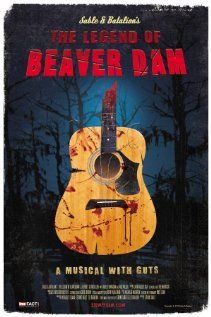 Click here to watch a trailer from the movie. Warning: portions of the clip are violent.

A Canadian short film about a campground has received honorable mention at the Sundance Film Festival, CTV.ca reported.

Quebec’s Jerome Sable and Eli Batalion were lauded for their musical horror tale, “The Legend of Beaver Dam,” about a campsite stalked by a crazed killer.

The award was presented at a ceremony held in Park City, Utah, on Wednesday (Jan. 26).

Recipients will also be honored at an awards ceremony on Saturday.

Before the festival, Sable said he and his partner set out to make musicals cool with their over-the-top campground comedy, “The Legend of Beaver Dam,” and plans for a full-out feature, “Stage Fright.”

“The perception of musicals nowadays seems to be dominated by some very, very cheesy stuff and to us that’s really too bad,” Sable said before the festival.

“They used to be really cool and then somewhere in history the cheesy musicals took over and now when you say, ‘Oh we’re doing a musical’ everyone thinks immediately to certain TV shows or certain kinds of movies…. There’s a time and place for them but it’s not the only kind of musical there is, it’s not the only way to do a musical. With ‘Beaver Dam’ and with ‘Stage Fright,’ we want to try to bring some balls back to the musical.”