By: Woodall's Campground Management|Published on: May 4, 2010|Categories: Industry News| 0 comments 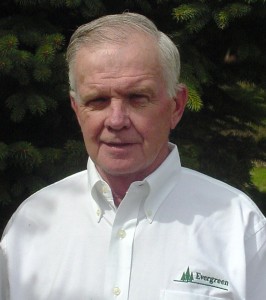 Many people not only know him, but love him. They refer to him as their friend first, and their business partner second. Richard “Dick” Hartford has a lot to celebrate this year — his 65th birthday, 37 years in the insurance industry, and 24 with Evergreen, a company insuring the campground industry, owned by campground owners.

President of Evergreen Indemnity and Evergreen USA, Hartford resides in Lewiston, Maine, and has two sons, Lucas and Justin. He is a man who has supported many causes within the Northeast Campground Association (NCA) and has gaveled many charity auctions. He has received both the  “Stan Martin Award” and the “Curtis Fuller Award” from state campground associations.

Hartford began a program of insuring campgrounds and RV parks in 1973 and started Evergreen in 1986. That year many campgrounds and RV parks were seeing their insurance premiums double and triple and often they could not even find coverage. During the mid-1980s nearly all of the insurance companies were pulling out of the camping industry. That’s when a group of people within the camping arena asked Hartford to find a long-term solution for insuring their industry. He set to work and found a group that was willing to invest to start Evergreen.

“It was exciting to put together a program when there was relatively no insurance available to campgrounds, and to get enough support from the camping industry from wonderful campgrounds that invested in the effort to start a new company like this one had never been done before,” he explained.

Hartford describes campground owners as a hardworking, down-to-earth and a respectful group of people.

“Very seldom do you ever find a rude campground owner,” he said. “You can’t meet a nicer bunch of people than in the camping industry. They are willing to help their fellow mankind and are very generous. As I look back, I can’t imagine that I could have ever picked an industry that would have suited me any better than the campground industry. I got to the point where I loved the camping industry more than the insurance industry.”

Today, Hartford continues to manage the long-range interests of the Evergreen companies, while his son Lucas oversees the daily activities.

“My dad brought me into the business by teaching me how to do risk management inspections and policy reviews of campgrounds and RV parks,” Lucas said. “But the biggest thing he taught me in this business is that Evergreen’s success only comes with the success of the camping industry. He realizes that the long-term interests of Evergreen come with the long-term success of the camping industry.

“As his son and business partner, I am forever grateful for him trusting me to run the daily activities of Evergreen. He has played many roles in my life from father, ski coach, boss, co-worker and friend. And in all those things I have seen him commit himself 100% to every effort. He does nothing half way. It is all or nothing for him and that is a quality I fully admire.”

In 2007 Dick and Lucas sold a local insurance agency in order to focus all of their efforts on Evergreen and the camping industry.

“My dad told me for years that the camping industry is the best group of people to deal with and he is 100% right – so that is what we focus on,” Lucas said.

Dick enjoys fly fishing, carpentry and electrical work and flower gardening. But most of all he enjoys watching Lucas take Evergreen to new levels of success.

“What I love now is watching my son take the company to heights that I couldn’t have,” he said. “It deflates my ego a little bit to watch that, but that is the most wonderful part about it, seeing how much better he is at it than I was.”

The future for Dick Hartford? He will remain the company’s chairman of the board and president for around five more years and at that time he envisions handing over full reign to Lucas.

“Maybe I’ll start an insurance company to compete with him, that will teach him a lesson,” he joked. “I can’t imagine myself not working and I will probably do carpentry and electrical work when I feel like doing it. I have gotten to a point where I can choose to do things when I want to which is kind of nice. Even if I give up the leadership of the company, I see myself being involved behind the scenes.”

On the subject of fatherly advice, Dick says one thing he has never tried to do is give advice to either of his sons.

“If they come and ask a question, I usually try to refrain and say, ‘What do you think you should do?’ I encourage them to do what they believe they need to do. I will give Lucas the same advice I gave him 15 years ago when I turned over the daily activities to him. He asked me, ‘But dad, what happens if I fail?’ I said, ‘If that happens, the only suggestion I have for you is to have another job lined up because you’re going to need it.’”

Failure, according to Dick, is the best education there is.

“Every young person in this world under the age of 50 needs the opportunity to succeed and fail on their own,” he said. “It makes you humble, teaches you a lesson and you move on. It wasn’t what I learned in a classroom in college – it was what I learned outside of the classroom – how to get along with people, how to budget my time, etc.”

It doesn’t take a long conversation with Dick to pick up on his sharp wit and sense of humor. When told people have nothing but compliments for him, he quipped, “They must be lying.”

“When I think of Dick Hartford I think about family and friends,” said Rick Abare, president of Campground Association Management Professionals (CAMP) and executive director of the Maine Campground Owners Association. “The business of insurance I think of as a secondary item when I think of him. I think about that uncle that everyone has who is wise, fun-loving, and energetic all at the same time. The good uncle.”

When Abare bought his campground in 1992 and went looking for insurance companies, he was thoroughly impressed with the concept behind Evergreen – that the campground owners are owners of the company.

“That kind of thing is what Dick Hartford would dream up,” Abare said. “He is always there for you. He is one of the people I have always looked to when I have a question about what is right or wrong and I know I will get the truth. He is genuinely one of a kind. The ‘what can I do for you, how can I help’ attitude is a Hartford family trait. This is part of why so many people look up to Dick and all he has done for the camping industry. There probably is no one like him. When you think of family and camping and put it all together and ask yourself who is always there for you, that would be Dick Hartford.”

Chip Menz, co-owner along with his brother Bruce, of Big Timber Lake Campground in Papemay Court House, N.J., met Dick in the early 1980s before he began Evergreen.

“When he decided to start Evergreen, we became invested in Evergreen,” explained Menz. “Dick is a straight shooter, he stands by his word and he is just a lot of fun, and easygoing.”

The Menz brothers are on the board of directors for Evergreen.

“Dick is good for the industry and I’m glad I met him,” Menz said. “He has a world of knowledge about the insurance business and he does what he does well. He has helped a lot of campground owners.”

April 26 was Dick’s birthday and this year his family planned a surprise party to mark 65 years.

“There haven’t been many chances to surprise my dad and he was completely surprised,” Lucas said.

To Dick his 65th birthday was just another day. But to his family there was a lot to celebrate.