Campground Next for 'Health Spa with Cops?' 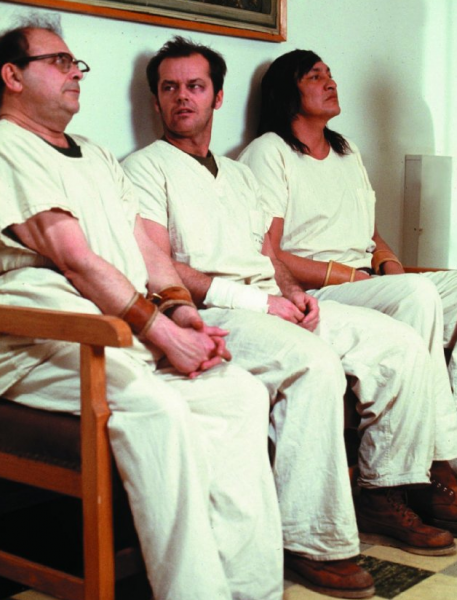 Jack Nicholson (center) in a scene from “One Flew Over the Cuckoo’s Nest” released in 1975.

The San Mateo County sheriff’s Honor Camp in the Santa Cruz Mountains in California was less a jail, acclaimed novelist Ken Kesey wrote, than it was a “health spa with cops.”

After faking his own death and sneaking down to Mexico for most of 1966 to escape a marijuana-possession conviction, the author of “One Flew Over the Cuckoo’s Nest” was sentenced to six months in the former Boy Scouts camp just a few miles from the La Honda home where he was first busted, the San Jose Mercury News reported.

The chief Merry Prankster chronicled his experience in “Kesey’s Jail Journal,” a fragmented, illustrated diary that explores race relations, authority and the oddball personalities of San Mateo County’s small-time criminals. The setting was “wholesome (and) neat and practical,” he wrote, but the people were crazier than the patients he famously observed in the psychiatric ward of the Menlo Park veterans hospital.

Now, nearly half a century after the camp’s most famous inmate served his time and high-tailed it to Oregon, county officials are talking about reincarnating the shuttered facility as a public campground, opening up new access to an alluring patch of woods in the middle of Pescadero Creek County Park.

The 11-acre camp, accessible by a single lane that twists down into the forest from Alpine Road, sits on a slope above Pescadero Creek. Boarded-barracks, picnic tables and an old bank of phone booths sit amid patches of redwood, oak and Douglas fir.

“The property is in a remarkably beautiful and rustic area,” said Supervisor Dave Pine, who has led discussions about the future of the site. “There is a tremendous shortage of camping and other outdoor facilities on the Coastside and in the Santa Cruz Mountains. My hope is that we can utilize this property to meet those needs.”

The county is looking for ways to augment the budget of the parks department, which needs an infusion of about $2.7 million in revenue. Turning the old correctional facility into a recreation spot could bring in more money for the county while providing something that’s in high demand: the opportunity to camp underneath the redwoods.

The site began as a Boy Scouts retreat, Camp Pomponio, in the 1950s. The Scouts installed a swimming pool and softball field on a stretch of level ground just above the creek. The county purchased the property in the early 1960s and erected the Honor Camp farther up the hill, where low-risk offenders toiled on work crews during the day and enjoyed the Scouts’ former amenities in their down time. In the early 1970s the Sheriff’s Office added the Medium Security Facility, aka the “Bird Cage,” a lockup for inmates who were deemed less trustworthy.

Both the camp and the lockup were closed in 2003 due to budget cutbacks. The Sheriff’s Office renovated the Medium Security Facility in 2008 in case the county’s overcrowded main jail gets too packed between now and 2015, when a new, bigger jail is expected to open in Redwood City. After that it will likely become surplus property.

Pine and other officials say the site, if opened for recreation, could be used simply for tent camping. But their brainstorms have yielded a bolder idea as well: transforming the property into a resort with a range of options, from camping to elegant lodging, in the vein of Costanoa in Pescadero.

The first step, said county parks director Jim Porter, is to gauge the interest of outfits that operate and market campgrounds and back-to-nature lodging.

“Right now we’re just talking ideas,” said Porter, whose research into the camp will be included in a new strategic master plan for county parks due out this winter, “but we really need to hear from experts what a market might bear for a property like that.”

It’s unclear how much of the old correctional facility would be reused. The water and wastewater treatment plants almost certainly would be, while the lockup would not. A few buildings in the Honor Camp, particularly the kitchen and staff quarters, could take on a second life.

Pine said the nascent vision for the facility evokes the biblical phrase of beating swords into plowshares. For decades the old Boy Scouts camp was used to incarcerate people.

“Now there is a chance,” said Pine, “to use it for outdoor education and recreation.”