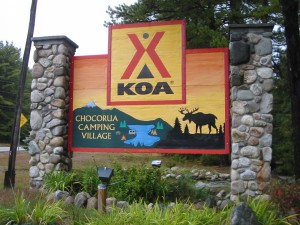 Late last summer, right before Labor Day, the three top staff members at Chocorua Camping Village KOA, a picturesque campground nestled next to Moore’s Pond and the Chocorua River in the White Mountains near Tamworth, N.H., approached owner Lee Spencer and informed him that they were leaving – immediately – to take new jobs in Florida. Until that moment, the trio had not given any inkling that they would be leaving en masse.

Spencer was dumbfounded, disappointed and somewhat apprehensive. He had just one staff member who was familiar with KOA’s KampSight reservation program.

One of the first things the veteran campground owner did was to call Howard Hawkins, the business development consultant for Kampgrounds of America Inc. (KOA) who covers the Northeast, for some advice.

Hawkins and his wife, Helen, were visiting their daughter in Pittsburgh when he got Spencer’s call. Within hours, they proceeded to drive from Pittsburgh to Spencer’s campground 700 miles away. They arrived the Thursday before Labor Day and ran the front desk operations until the following Tuesday.

“As it turned out, I was going to be up in Vermont before Labor Day and then go over to Maine anyway. It worked out great for both of us,” said Hawkins, a former KOA campground owner in Freeport, Maine.

To top it off, Hawkins suggested Spencer check with the Bar Harbor Woodlands KOA in Maine, which had shut down for the season after the holiday, to see if any staffers there could help out. Sure enough, two could and that couple arrived a week later and provided a seamless transition at Spencer’s campground.

It’s just one of several instances where affiliation with the nation’s largest chain of campgrounds has paid off for Spencer and his wife, Shirley, who opened their campground in 1975 and named it after the nearby legendary Mount Chocorua.

“It shows the commitment of the KOA system to their parks and how the whole system is supportive of one another,” Spencer said. 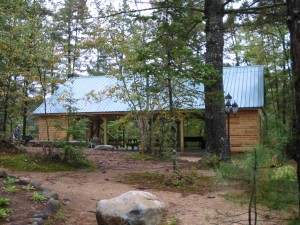 The Chemist Became A Campground Owner

Owning a campground wasn’t always in the Spencers’ plan. A native of Dover, N.H., Lee Spencer was on track to earn his Ph.D. in chemistry from Duke University and was considering a job in private industry. But, he and Shirley had been planning with another couple to develop a campground on land Spencer’s uncle owned near Tamworth.

The other coupled bailed out, however, and moved to Europe, leaving the Spencers on their own.

“We ended up with more than we bargained for,” recalls Spencer who is now able to laugh about it.

Much of the land they purchased was densely wooded, developed only to the extent that six rustic cottages stood on the edge of the property. Spencer bought his first piece of heavy machinery and began to clear the land just enough to carve out some campsites. He was careful to leave most of the trees, a practice he would continue to this day.

Chocorua Camping Village opened to the public with 10 sites and a comfort station. While Lee designed and constructed the Rec Hall and Camp Store, Shirley, a sixth-grade teacher, spent her summer breaks working the office, maintaining cabins and creating the business infrastructure of Wabanaki Lakeside Vacation Corp.

The cabin complex, known as Wabanaki Lodge, is situated on an 8-acre parcel. A grassland marsh takes up about 40 acres. The remaining 100 or so acres consist of a mature hardwood and softwood forest with five miles of groomed nature trails.

For the past 13 summers, the campground has published an informative newspaper.

During the winter, the campground is open for seasonals who enjoy snowmobiling and cross country skiing in the area. 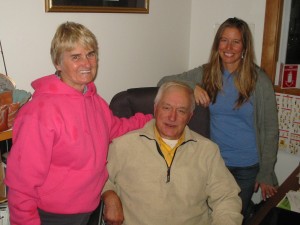 Spencer, now in his early 70s, sees nothing wrong with being labeled a “mom-and-pop” operation.

Through the years, Spencer has been an avid auction attendee and has purchased large amounts of supplies, building materials and equipment at bargain prices. He calls it “an ongoing battle” to store what he buys and keep it out of the sight of campers. “Every campground has this problem” to some degree, he says.

Campers themselves, the Spencers were careful to preserve the unspoiled environment of the region while providing clean, attractive facilities and spacious sites with privacy. Their stewardship ensures that their campground will be enjoyed by future generations.

The Spencers set out nearly 40 years ago to build a successful campground and they have succeeded. Their park was rated 5W5W by Woodall’s and 8.5/9.5*/9 by Trailer Life in the 2012 campground directories. In 2006, Chocorua Camping Village KOA earned Medium Park of the Year honors from the National Association of RV Parks and Campgrounds (ARVC). They won the award again in 2008.

On their staff is their daughter, Tammie, a ceramic artist by trade, who grew up on the campground and has delved into every aspect of the operations, from picking up litter and cleaning bathrooms to recreation directing and bookkeeping. This past season she juggled administrative duties, purchasing and marketing, as well as updating the lodging and assuring that camping stays “green” with recycling and landscaping.

Her husband, Kevin, is a chef and prepared many meals and cookouts during the season. He developed the community garden for the Rec program.

Site map for the campground

Spencer says there have been several keys to the campground’s success.

First, he says, he and his wife have endeavored to develop “a facility that is of the highest quality possible that would attract the quality guests who would appreciate the outdoors we have maintained.”

Second, the Spencers have tried to lead the way in new programs. They were the first in New Hampshire to develop “supersites.” These sites along the creek feature decks and are landscaped. Chocorua Village was the first campground in the state to offer a dog park. The park features an AKC-designed obstacle course and six covered kennels for “doggie day care” for campers while they are away from the park. Two workampers camped nearby will walk and play with the dogs.

“It makes a good program,” he said.

The Spencers have been rewarded with a very loyal customer base. Spencer estimates that 80% of their guests are returnees or friends of returnees – and they are dedicated. For example, when the Spencers needed to build a new pavilion this past summer, several of their seasonals, who happen to be building contractors, took it upon themselves to erect the structure free of charge. In one day, the team erected the trusses for the 28-foot by 46-foot structure, and the next weekend they put on the roof.

Through the years, the Spencers have been in the forefront of campground associations and are real “joiners.” They first joined Best Holiday Travel Parks in the late 1990s. Lee was the association’s vice president and served on the board.

Later, he met with David Gorin and helped organize the Best Parks in America marketing network.

“We felt this was a good step forward for our park,” Spencer said.

Says Gorin, “Lee and Shirley really have their heart in the campground business. It’s evident how much they love the business by how Chocorua has evolved over the years. The setting is beautiful – I love the view out over the water and the natural setting. Lee was a very early adaptor to the Best Parks model, recognizing the importance of a part of a special industry segment. With Lee’s leadership, Chocorua has used their Best Parks affiliation to their great advantage and continue to do so today. Everyone in the Best Parks network can take a lesson from Lee and Shirley on how to use the brand to help grow their business.”

In the fall of 2007, Pat Hittmeier, then the vice president of sales and development with KOA, spent several days at Spencer’s campground lobbying them to join KOA.

“I remember sitting with Lee and his family and talking about KOA,” Hittmeier recalled. “Wonderful family, very dedicated to their guests and their business, great campground.”

As Hittmeier recalled, “The key to my ‘sales pitch’ is simply getting a potential partner to actively engage in a conversation – The key word being conversation or a two-way dialogue. Once this happens, the KOA benefits and value usually stand up pretty well. In the end, as most people are, Lee and Shirley were still on the fence and I believe it was our trial guarantee that probably gave them enough comfort to give us a try.”

Spencer recalled, “I was at a plateau with our client base in the Boston and New England area. It was leveling off. We needed to tap into a new system.”

Says Shirley, “We had watched them (KOA) improve as a franchise. Their standards were our standards.”

The Spencers opted to join.

“We were very excited when they decided to try KOA after so many years of doing a great job of running their business as an independent,” Hittmeier said. “The property was in such great shape that other than some adoption of KOA systems and some signage it was ready to be part of the KOA family almost immediately.”

“The KOA camping base became a source of new guests for our park,” Spencer said. “KOA members are very loyal campers to the KOA system. We’re very pleased in our association with the KOA franchise.”

Adds Hittmeier, “Today, Chocorua KOA earns our Presidents Award and receives exceptional service scores from their guests. There is no doubt in my mind that they add value to the KOA system by their participation and by providing such great experiences for their campers.”

The Spencers spend their winters in the Bahamas, where their daughter Tammie met her husband.