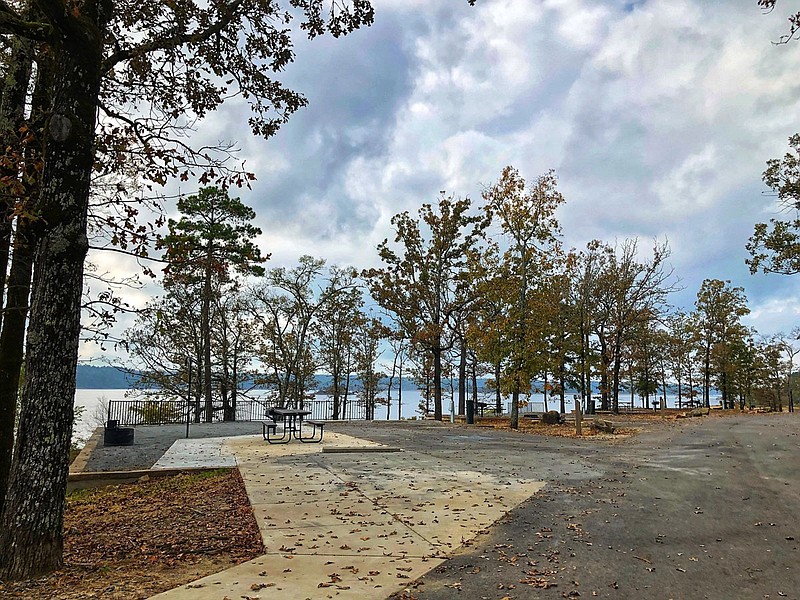 Several campsites are located near the water at DeGray Lake Resort’s DeRoche Ridge Campground, which recently reopened after being closed for five years. – Photo is courtesy of Arkansas State Parks

After being closed for nearly five years, DeRoche Ridge Campground, located on a scenic peninsula at Arkansas’ DeGray Lake Resort State Park, reopened to campers Wednesday (Oct. 28), and the state expects its campsites will fill up quickly, according to The Sentinel-Record.

The campground originally closed for renovations in the winter of 2015. Meg Matthews, deputy chief of communications for the Arkansas Department of Parks, Heritage and Tourism, said they were almost ready to reopen the campground in the spring of 2018, when a record flood occurred, damaging the newly renovated area.

“It’s really exciting, especially because we really expected opening it up two years ago,” Matthews said, noting the finished campground “has all the renovations that we wanted originally when we started five years ago.”

The flood damage was an “unfortunate setback,” she said, but they were able to “roll with the punches” and continue their work.

Being on a peninsula means the campsites are “surrounded on three sides by water (with) beautiful views,” she said.

The renovations include 25 sites that have been updated to Class AAA, and there are six walk-in tent sites. Matthews said they have also upgraded the sewer and water systems and put fire rings and picnic tables in the campgrounds.

“All sites have been leveled,” and have tent pads, Matthews said, noting two of the sites are also ADA accessible.

The bathhouse and the road inside the campgrounds were also worked on. “The bathhouse got a face-lift,” she said.

The sites are expected to be reserved quickly “especially during these times of COVID,” she said, noting many people are getting “cabin fever” in their homes.