RVs were sent airborne at Camper Clinic, in Rockport, Texas

Campground owners in the South Gulf Coast of Texas are struggling to come to terms with the devastation left behind by Hurricane Harvey, which lambasted the coast and continues to dump rain as a tropical storm on Houston and surrounding areas.

The historic storm has ripped down power poles, strewn RVs across RV parks and left most owners wondering what to do next.

Peggy Hilton, manager of Southern Oaks Luxury RV Resort in Aransas Pass, told Woodall’s Campground Management (WCM) that it was like “a bomb went off,” and that they are still trying to estimate the damage that was done.

“We have no power, water or sewer,” she said. “Our office and clubhouse are devastated and we are waiting for everything to get running again before we let people in to assess their individual units.”

Randy Hurt, on-site manager of Hidden Oaks RV Resort in Rockport, a small Gulf Coast community that took the brunt of Harvey’s force when it came onshore, said they are solely focused on getting power restored.

“Half of our trees are down and half of the RVs in the park are completely damaged,” he said. “Everyone down here is out of power, poles are down and we are being told that it could take weeks before everything is restored. I was told Rockport isn’t even on the radar yet by the utility company.”

Hurt said he had been through tornadoes before, but that he had never seen anything like Harvey.

“Winds were around 140 to 160 mph and the eye of the storm went right over our park,” he said. “You could see the stars when it was going over.”

RV dealers in the area are also trying to pick up the pieces. Phil Elam, executive director for the Texas RV Association (TRVA) which boasts 100 dealerships as members, said that he continues to receive reports on the impact inflicted by Hurricane Harvey that depict the “hit-and-miss” nature of the storm when it came onshore. 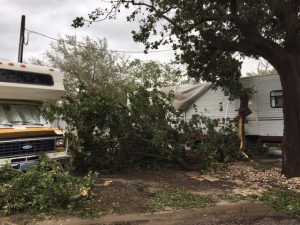 A tree fell over on an RV at Hatch RV Park, in Corpus Christi, Texas

“I talked to Chris Hoover at Ron Hoover’s RV and Marine, and he said that for the most part they had minor damage,” Elam said. “He did say that 100% of their inventory will need repairs due to wind, blowing debris and rain damage.

“Then I spoke with Thad Carothers, who is general manager at Camper Clinic which is right down the road, and he said that their 10-acre lot is completely empty because all their units had either been blown or washed away. It’s pretty unbelievable that these dealers, who are within a mile or two, had completely different experiences.”

Several businesses in Corpus Christi, which is around 20 miles away from Rockport, told Elam that “they were pretty much unscathed.”

He noted, “I heard from six or eight dealerships and they were telling me that their inventory was safe and sound.”

Elam stressed that, in the big picture, Harvey also delivered a punch to the tourism industry while crippling the state’s economic activity and trade.

“Rockport is right on the Gulf Coast and there are a ton of RV parks there,” he said. “People like to go down there and fish or just enjoy the coast. A huge part of the Gulf Coast economy is based on tourism. Harvey has upset the economic sustainability of that area for a long time.

“Statewide, we’re looking at billions of dollars lost. The Houston channel is at a standstill, as is the trucking industry, which is huge in Texas.”

Brian Schaeffer, executive director of the Texas Association of Campground Owners (TACO), said that right now campgrounds are falling into one of two categories. Some owners are discovering they suffered wind damage, but not a lot of water damage because they were on higher ground or not near the eye of the storm. Other owners experienced both wind and water damage, and are struggling to get in or out of their parks.

“A lot of parks that just experienced wind damage are already starting the cleanup process and waiting for power to return,” he said. “A lot of owners are overwhelmed right now just looking at all the cleanup they are going to have to do. They feel bad for their guests and responsible for what happened, even though it was caused by Mother Nature.

“The key is for owners to prioritize what they need to tackle first,” Schaeffer continued. “A lot of park owners are going to go into a triage of sorts, getting certain sections of their park up and running so that they can take in guests that need places to stay. There are going to be professionals, like insurance adjusters, emergency workers, etc., that will have rigs of their own and they need places to park them.”

Schaeffer also mentioned that for most campground owners money is going to be tight and that staffing will be key for a smooth recovery.

Manufactured homes are sorrounded by water that overflowed a nearby drainage swale and 10 Mile Canal which abuts the Fort Meyers RV Resort.

Hilton said that they will work to rebuild everything Harvey destroyed.

“We were lucky not to have the high water issues that Houston is having right now,” she said. “You just hope those people can pull through this.”

Hurt said he was blessed to learn no one had died or been injured at his park.

“We are grateful for that,” he said. “The recovery here is going to take months, not weeks, but at this point we are just trying to take care of our customers.”

Hurt said that if anyone is looking to donate goods to the recovery effort, generators and fuel are the two most urgent products right now.

“Everyone down here is just having to drive quite a distance to get anywhere,” he said.