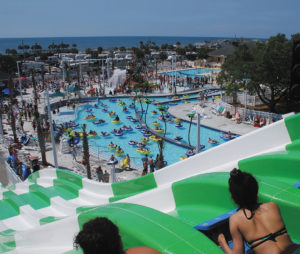 When Victor and Jessica King opened Lake George RV Park in Lake George, N.Y., in 1966, it was one of the most modern campgrounds in the United States. Each of its then 200-plus campsites had 30-amp electric connections, water, and sewer service, which was almost unheard of.

“We’ve always tried to create a camping environment that was ahead of the industry,” said David King, the park’s second-generation owner. Lake George RV Park has continued to develop new amenities, activities, and entertainment, including live music; animal and reptile shows; nature workshops; and performances by magicians, hypnotists and illusionists.

But the King family’s latest addition could be its biggest yet — a $5 million aquatic park called Cascade Cove, which opens this summer. Mr. King said he has been rushing to complete it this year as a way to celebrate what would be the 100th birthday of his father, who died six years ago.

Cascade Cove will feature a zero-entry swimming pool, with a gradual slope from the deck to the water; hot tub clusters that can seat up to 38; and a water play area with 32 interactive spray features, a dumping bucket, and a 34-foot-long enclosed, twisting slide. Mr. King said guests repeatedly have asked him to install new water features to replace some of the park’s three existing aquatic areas, which were built between 1966 and 1976.

That trend is visible across North America as consumers seek campgrounds with special water features. Overall, relatively few public and private campgrounds offer such perks, but a growing number are installing everything from spray grounds to aquatic play structures to water slides.

Campgrounds are seeing the benefits of such investments. 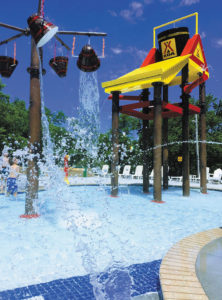 The Indianapolis KOA opened their water park in 2017.

“Our business has absolutely increased,” said Kristie Kuper, who co-owns the 200-site Thunder Bay Kampgrounds of America (KOA) in Ontario, with her husband, Michael.

“It draws the family,” Kristie Kuper said. “We now cater to the younger children as well. We have two big heated saltwater pools in the same area as our splash pad.”

The Indianapolis KOA in Greenfield, Ind., opened an aquatic park last year that includes a zero-entry swimming pool. Manager Rachel Vaughan said business has increased, in part because grandparents like a place they can take their grandkids.

Even campgrounds close to the ocean are finding it worthwhile to offer special aquatic attractions.