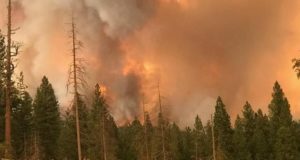 The threat of the Ferguson Fire and the increasing presence of smoke has caused reservations to drop at High Sierra RV Park in Oakhurst, Calif., according to the park’s general manager Kathy Frye.

“We were packed in the weeks before the fire started,” she noted to Woodall’s Campground Management (WCM). “But now we have quite a few openings.”

Authorities shuttered parts of Yosemite National Park earlier in the week and Frye explained that High Sierra is only about 10 miles from the flames.

“They have the fire around 30% contained and God willing we won’t see any damage due to the fire,” she said.

Right now, Frye is dealing with an influx of cancellations.

“We have quite a few campers from Europe that are still showing up and we are directing them to other activities besides Yellowstone,” she noted.

Frye blames poor forest upkeep for allowing the wildfire to start in the first place.

“We have been getting a lot of rain the last few years, but this past year we didn’t get as much snow pack,” she explained. “Officials don’t let people in the forest to take out the dead trees and care for the vegetation and that is what leads to a lot of these fires.”

Further down the road in Coarsegold, Calif., an Escapees members-only park, Park Sierra, is safe from the blaze, but still battling smoke.

Yvette Tuggle told WCM that there is no threat to the park.

“We are still seeing less traffic mainly because people are traveling further to get out of the area,” she noted. “Judging from history this fire could continue for three to four more weeks.”

Currently, the Furgeson Fire has burned more than 45,000 acres, while firefighters are also dealing with a multitude of other fires, according to Cal Fire.

California Gov. Jerry Brown declared a state of emergency in Riverside County Thursday (July 26) as a massive fire tore through thousands of acres near Idyllwild in the San Jacinto Mountains, according to TIME.

The Cranston fire was no accident, authorities said. Brandon N. McGlover, a 32-year-old man from Temecula, was arrested Wednesday for allegedly starting the blaze and several others in southwest Riverside County.

The fire erupted on July 25 in the San Jacinto Mountains and has spread over 4,700 acres in the area.