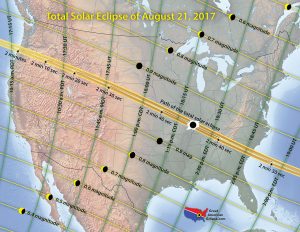 On both ends of the “Path of Totality”, campgrounds and RV resorts are making the most of this unique phenomenon. From coast to coast campers are flocking to the path where they can witness the eclipse in its entirety.

It seems there is no shortage of space-themed parties and witty titled events taking place on Aug. 21 across U.S. campgrounds. Whether young or old, there are events and watch parties to satisfy the stargazer in everyone.

At Jellystone Park Camp Resort in Nashville, Tenn., space-themed crafts for the kids are scheduled the Sunday before the eclipse. Young campers are encouraged to make their own moon sand, assemble “nebula jars” and construct crafts that will go inside the campgrounds’ eclipse time capsule.

Nashville Jellystone Park Manager Janet Stowers, said all campers are invited to a watch party in the afternoon and to also attend a sky-gazer class prior to the eclipse. The class will teach eclipse viewers safety precautions and provide special viewing glasses.

After the eclipse kids are encouraged to continue the fun with a moon rock scavenger hunt, galaxy tie-dye and a moon rock relay game.

“You’re never too old to have fun!” stated Stowers.

At the other end of the path in Casper, Wyo., adults will find plenty to do at Fort Caspar Campground. An eclipse-themed day of events will take place with everything from food trucks to door prizes. Campers were personally invited to attend a watch party in the afternoon.

Fort Caspar Campground Manager Spring Bertagnolli explained they are focusing on the science aspect of the eclipse and are excited to host two astronauts as guest speakers. Other special guests include NASA personnel, the Casper College Geology Department, Boy Scout troops and a few astronomers.

Both campgrounds in Tennessee and Wyoming are completely booked, Fort Caspar has been booked solid since January 2015, which is typical of most campgrounds in and around the path of totality. However, Guaranty RV in Junction City, Ore., has a plan to remedy this situation by hosting a Totality Rally.

Guaranty RV is offering one free night stay to all RVers between Aug. 19 and 22. Located just 15 minutes from the path of totality, all campers are invited to dry camp behind the Guaranty RV Motorized Showcase, although campers must register to attend.

Newport, Ore., on the coast southwest of Portland, is one of the first towns in the Path of Totality in the U.S. to experience the eclipse. Kurt Gehlken, sales agent for Pacific Shores Motorcoach Resort, an ownership based RV park.

“The whole town of Newport is going to be one big party,” said Kurt Gehlken, sales agent for Pacific Shores Motorcoach Resort, an ownership based RV park. “They are estimating 100,000 people visiting our area. We’re booked up solid and have been for a couple months. All our owner and rental spaces are full. The owners group is planning a big party in the clubhouse and we are going to have our hands full at full capacity.”

He said the absolute center is about five miles north in Depoe Bay, but all the surrounding state campgrounds, such as Beverly Beach, are completely booked and expanding some camping areas to accommodate the event. All hotels are full as well.

“Everybody’s getting geared up for this. We’ve got people coming all the way from Florida to see it here first,” he said. “We’re not promoting this one. People started booking last November. This is a totally self-promoting event. Who knows, we could be fogged in that day—but people are coming anyway.

Whether an eclipse camping trip was planned months, or even years, in advance or traveling to the path of totality is a spur of the moment decision, there will be plenty to see and do across the country.