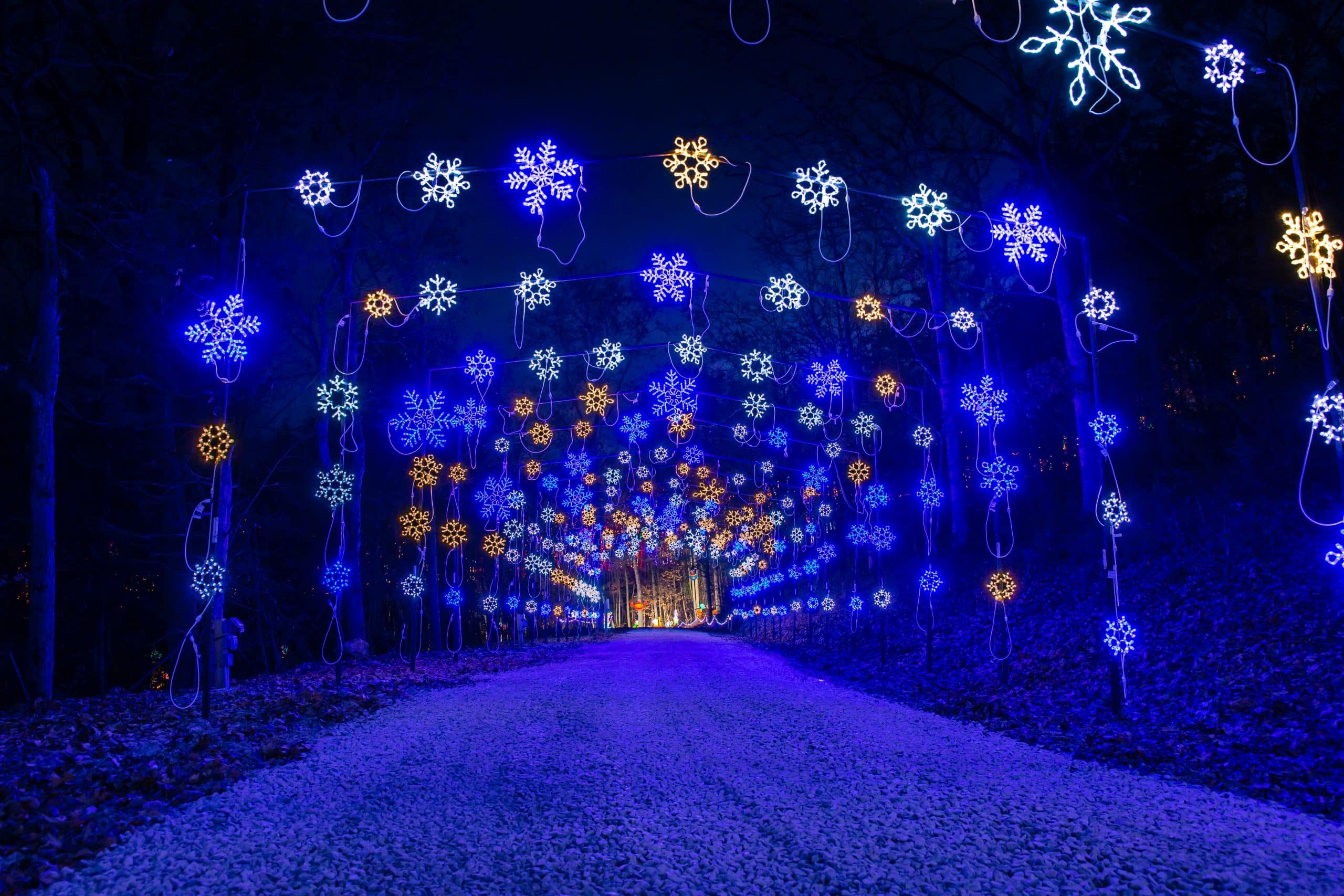 Parks can capture the holiday spirit — and some additional cash — by investing in a light show.

After Halloween passes in late October and many of the northern campground owners close their parks for the season, some park owners shift to a holiday focus as they look to continue making money after the traditional camping season has ended.

Eleven years ago, Lake Rudolph Campground and RV Resort in Santa Claus, Ind., started its annual Land of Lights display, according to Dave Lovell, regional marketing manager for the park that is owned by Southfield, Mich.-based Sun Communities Inc.

Since then, he told WOODALLSCM.com (WCM), the show has exploded in popularity, drawing in an estimated 38,000 guests in 2018.

With more than 300 light displays, the 1.2-mile route also features 11 giant Rudolph story scenes that depict how the reindeer was born and grew up in Santa Claus, Ind., according to Lovell.

“We decided to start putting on this show because it just made sense to have a Christmas light show here in Santa Claus, Ind., and it also works to provide the park with some additional revenue that it normally wouldn’t get this time of year,” he said.

In its 10th year, the Wisconsin Christmas Carnival of Lights at the Jellystone Park in Caledonia, Wisc., draws thousands, according to Bridget Bender, who owns the park with her parents, Randy and Theresa Isaacson.

Started because Bender remembered the good times she had as a child going around looking at Christmas lights during the holiday season, she works to incorporate new additions into the display every year.

This year, Bender said the light show will feature a different route and a 200-foot light tunnel that has the capability to show images, letters and words.

“This show has really become a huge marketing tool for the park, because we have people that will come through for the show and realize we have cabins and mention that they want to come back and camp with us,” she explained.

Kathy Jones, owner of the Jellystone Park at Six Flags in Eureka, Mo., with her husband, said that they had bought the park to do the light show — Santa’s Magical Kingdom — but quickly found out that they liked operating both businesses.

This year marks the 29th year they will be hosting a Christmas light show at the park, and while Jones says she doesn’t like to give out an exact number of how many people the show attracts, she did say, “It is a lot.”

With more than four million lights in the display, Jones said that the light show was started because at the time there was nothing like it in the area.

“We have been doing this long enough that we have families bringing along third generation family members,” she explained.

The park also gets a marketing boost by putting on the light show.

“We have people that come back during the summer to camp because they went through the park during the light show and vice versa,” Jones said.

Lovell said that campgrounds make a perfect place to host a light show. 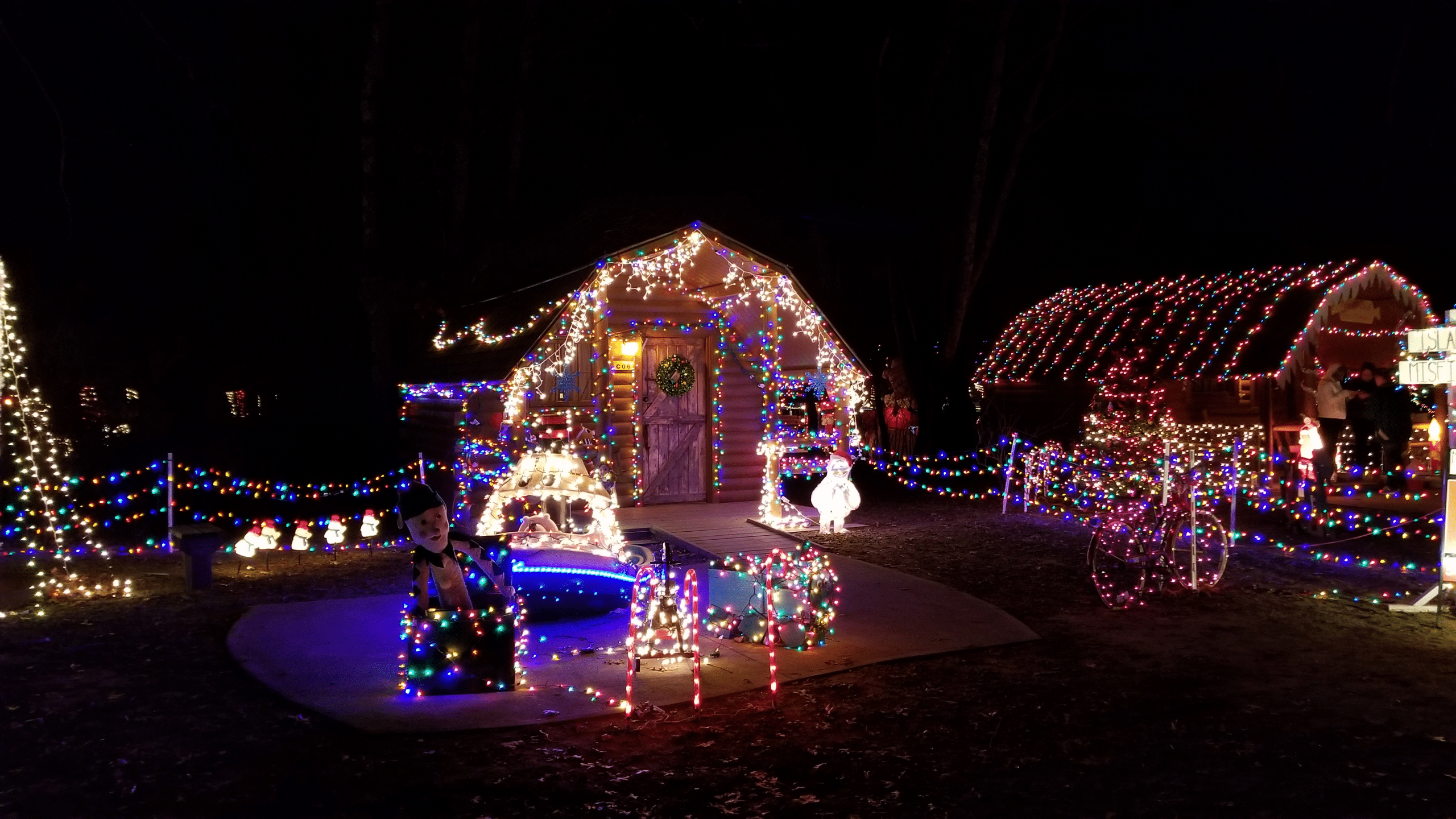 Asking the community to get involved in a light show can help defray costs.

“You already have the roads and you have electrical pedestals at every site,” he explained. “You don’t have to run electrical cords all over the place.”

Brian Miesch, owner of Idaho-based Lights for All Seasons, a company that builds light displays for large light shows throughout the country, including the displays at Lake Rudolph, said that campgrounds also make an ideal place to hold a light show because of the layout of the land.

“A lot of parks have wooded areas and intimate turns and loops that really add to the character of the show,” he explained. “We do a lot of fairground projects, where the property is just a barren landscape. Campgrounds are so much more fun to work at because most of them have mature trees and we are able to design a light show that utilizes the unique landscape.”

“We have an artist that comes in and welds the pieces together for us,” said Jones. “He has been with us since the beginning, so it helps keep things consistent, since we have the same person working on it every year.”

Bender says a number of different people, including her sister, help to design and create their park’s pieces.

“It is wonderful because you are never going to see something the same way at a different show,” she explained. “We also can take feedback from our guests and create displays based on what we want to see.”

Lovell said that Lake Rudolph’s light show is unique because of the custom-made story boards that accompany the display. Some of the displays are more than 30 feet tall and 100 feet wide.

“These displays are rugged,” he explained. “They are built to last forever.”

Along with the boost that these light shows can give to a park’s marketing efforts, it can also boost a park’s relationship with the surrounding communities.

Lake Rudolph for example is located in a community with a population that hovers around 2,500, according to Lovell. Bringing in the light show has helped anchor the community as a destination during the holiday season, he noted.

“We are pulling from the larger cities that surround us,” he explained. “All of that business is boosting other local businesses too, because all of these guests need a place to eat and gas up. We also have other businesses that benefit, like a local candy shop and a store that sells Christmas ornaments.”

Lake Rudolph utilizes a partnership with McDonalds to help market the light show, as well as raise money for local Ronald McDonald Houses.

Bender offers officials from schools and other nonprofits in the area the opportunity to raise money for their schools or organizations. 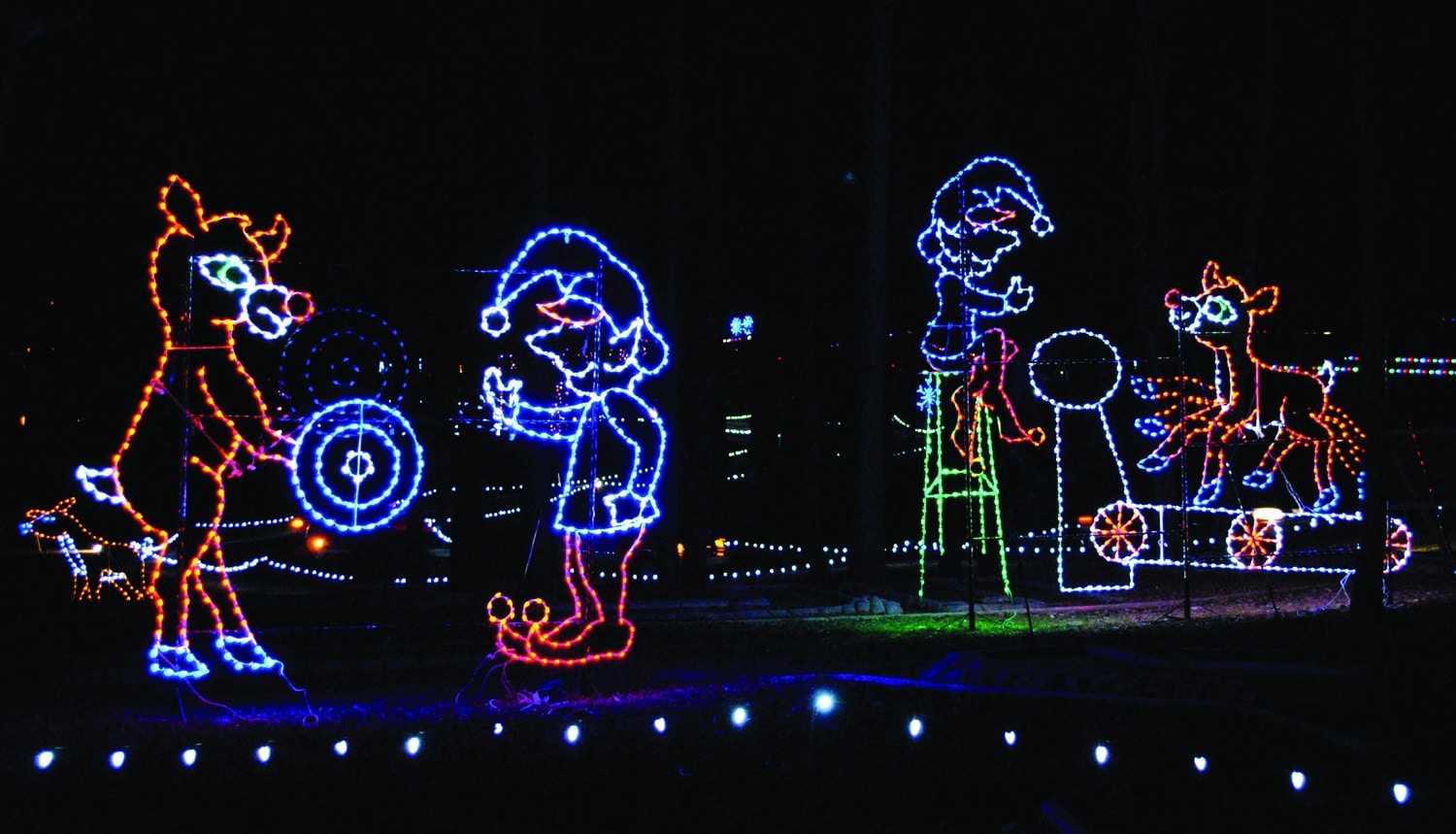 Light shows offer another opportunity to market a campground.

“We have selected dates that groups can choose from and they get a percentage of the gate fee from every customer that comes in on the day they choose and says they are there to support that group,” explains Bender.

At the Boston/Cape Cod Kampgrounds of America (KOA) the light show is put on by the local community and the park is merely the host for the event, according to Ryan Newbrough, general manager of the park.

“Basically, they set up a driving tour through our park with beautiful decorations all through the trees,” he said. “They use some of our cabins for a decorating contest, where local businesses will bid on packages to come in and decorate the cabins. Everybody has a lot of fun with it. They will also have Santa Claus stationed at one of those cabins and they take pictures with the kids and hand out gifts.”

Newbrough says that the park really benefits from all of the marketing that is done by the organizers putting on the show.

“We have a lot of people that come through and say that they didn’t even know we were here,” he explained.

Preparing for the Show

Prepping for a light show is a large undertaking, according to Jones, who said she starts planning her display in February, before rapidly putting up the display between the time she closes the park in late October and the time she opens the light show around Thanksgiving.

Bender said her park has people working on painting and certain aspects of the show a month-and-a-half before the display is set to open in mid-November.

At Lake Rudolph, it takes two solid weeks of labor to put together the light show after the park closes its Halloween show at the end of October.

“We open the Christmas light show on Thanksgiving, so some years that is earlier than others,” said Lovell. “Once staff members get the display up, then they’re tweaking things and making sure bulbs are lit.”

Lovell said one of the things owners need to look at when planning a light show is the route that the show is going to take through the park. He said that when Lake Rudolph first opened its show the route the park first used wasn’t working out very well, so park officials adjusted it moving forward.

“We now have multiple incoming lanes where we can process credit cards and push traffic through quicker,” he explained. “We still get backed up on busier days, but for the most part everything runs smoothly.”

Bender said that they have learned over the years how to better program the music that goes along with the light show. She said making sure that the light show has plenty of movement in it is also key.

“We also learned that you can only hook so many strands of lights together,” Bender explained. “If you put too many together, then a fuse will blow.”

Miesch said that the investment in creating a light show can be large, but that park owners can offset the costs by partnering with local businesses or organizations.

“You can offer them signage at the show,” he explained. “Or some show organizers give out grab bags to each guest that can include coupons or other advertisements inside of them.”

With a light display costing thousands of dollars to start, Miesch said that some organizers slowly piece their displays together over time.

“You do that initial investment and you get people excited, and then use some of that profit to reinvest into making the show bigger and better,” he explained.