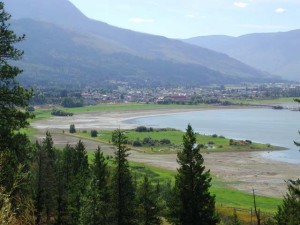 Show us the money.

That was the response from the development and planning services committee in Salmon Arm, British Columbia, on Monday (May 16) to a request from Sturgis North regarding camping, the Salmon Arm Observer reported.

The group plans a motorcycle rally and music festival –modeled after the annual rally in Sturgis, S.D. — in this British Columbia community of 15,000 July 13-17.

The committee – which is made up of members of the council – decided not to authorize an application for submission to the Agricultural Land Commission until the event organizers provide the $40,000 that was promised to the city for policing.

“Sturgis agreed to pay by May 15th $40,000 for policing costs,” Mayor Marty Bootsma reminded council members, and suggested that support for the application be withheld until the money is forthcoming.

“I’m OK with that as well. I think your point is an important one.”

The Salmon Arms Roots and Blues Festival, held at the town's fairgrounds. Farmland across from the fairgrounds is scheduled to host vendor and RV camping during the Sturgis North motorcycle rally in July.

The Sturgis North application is for the use of farmland across from the Salmon Arm fairgrounds at 550 and 690 10th Ave. SW to allow vendor and recreational vehicle camping during the motorcycle rally and music festival.

Although Sturgis North is a five-day event, the application is for 14 days from July 8 to 21 to allow set-up, tear-down and clean-up.

Owner of the property, Johan DeDood, wrote in a letter to the land commission that he supports the application.

Carl Bannister, the city’s chief administrative officer, told council the request would still be coming forward to the council’s next meeting on May 24.

Bootsma replied: “Perhaps this will be resolved by then.”

All of council members present voted to wait until the promised money is received. Couns. Ivan Idzan and Kevin Flynn were absent.

Sturgis has also applied for a temporary use permit from the city, because camping is not a permitted use in the zoning.

That application will go to the June 6 meeting of the development and planning services committee.

The two parcels in question make up two of the three sites that the Roots and Blues Festival has received approval from the land commission to use. Roots and Blues will also be using a site at the corner of 10th Street SW and 10th Avenue SW.

Since 2005, the Agricultural Land Commission has allowed non-farm use of the two sites for the Roots and Blues Festival and, subsequently, council has approved or renewed temporary use permits authorizing a maximum of three days of camping on the parcels.

The land commission granted its most recent approval in March 2009, one which will expire in September of this year. The latest temporary use permit from the city will expire Aug. 31. Roots and Blues will take place Aug. 19 to 21.