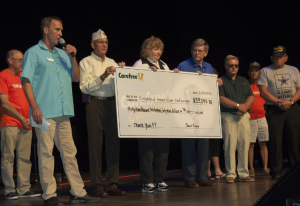 Carefree has worked closely with DAV over the past three years, raising $100,000 in cash and in-kind donations to help veterans get benefit and disability compensation. According to DAV State Veteran Administration Volunteer Service Chairman Mary Ann Keckler, “100% of the donation will go directly to helping veterans who are determined by the VA (U.S. Veteran’s Administration) to be disabled by an injury or illness that was incurred or aggravated during active military service.”

Army Veteran Doug Crawford said, “As a veteran and a Carefree team member, it was a great honor to stand on stage with my brothers and sisters of the armed forces and help hand over that huge check. The DAV is so deserving of our support. I was honored to be part of that very touching moment.”

Carefree Communities founding partner Colleen Edwards said, “Many of Carefree’s guests and residents are veterans and it is an honor to work with an organization that supports so many of our own.  Community service is at the forefront of who we are and it has been incredible to watch not only our industry partners get involved, but to see the support and donations that have come directly from our communities.”

The Carefree’s Got Talent finale came after weeks of preliminary park contests at 26 different RV and MH communities throughout Florida. A panel of four judges, including celebrity judge James Marvell of 60’s musical group Mercy, Beecher Jacobsen of Jacobsen Homes, Tim Berg of Sysco Foods and Tara Allan of the Lakeland Center determined the winners.

For the second year in a row Carefree’s Sarasota-based Sun-N-Fun RV Resort took home first-place honors with Sun N Fun Transfer, an acapella quintet, walking away with the $5,000 grand prize.

In second place, James Smith of Lakeland RV Resort gave the crowd a big laugh with his Scottish humor and musical review and was awarded $500.