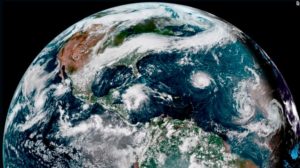 Grocery stores are restocking shelves with water and bread, and supply stores are selling a lot of plywood and generators today (Sept. 10) as East Coast communities prepare for Hurricane Florence to strike hard later this week, according to CNN.

Forecasters say Florence could mount a direct, devastating hit on North Carolina and South Carolina as the most powerful storm to hit the area in three decades.

Dee Witting, executive director of the Carolina Association of RV Parks and Campgrounds (CARVC), noted to Woodall’s Campground Management, that no evacuations have been issued yet for either North Carolina or South Carolina.

“Once that occurs the campgrounds inland and out of the storms path will take in the evacuees,” explained Witting. “The campgrounds play a huge role in coordinating with each other if they have sites available…etc.”

She noted that some inland campground members have reported a few calls for evacuation, but are waiting for evacuee orders to be given. Witting said that the association works with its members to make sure they are prepared for these types of situations.

Swells up to 15 feet high could reach the coast, Myers said, and the storm system is likely to stall when it hits land, dumping up to 20 inches of rain in some inland locations.

Florence was about 625 miles southeast of Bermuda as of 5 a.m. ET Monday. The storm had maximum sustained winds of 105 mph and was moving west-northwest at about 9 mph, the National Hurricane Center said.