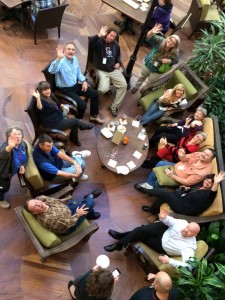 The Colorado Camping and Lodging Owners Association (CCLOA) conference and expo for campground owners and managers, “Sharing the Passion of Outdoor Hospitality,” brought together a mixture of newer professionals and the latest generation of several founding members March 18-20, according to an announcement from the association.

Of those in attendance, personal experience in the industry ranged from about a year to more than five decades.

During the event, 16 industry suppliers were represented, with several of them providing lively seminars. Damian Petty of Leavitt Recreation Insurance,was on so much of a roll that the attendees didn’t want his presentation to end, Executive Director Mary Arlington said. “Insurance isn’t a topic that tends to run overtime because of all of the fun. Damian pulled off a highly informative presentation that will be remembered by everyone.”

In the weeks leading up to the conference, the association surveyed members and nonmembers across the state. There is a lot of change brewing for CCLOA and, according to Arlington, it’s an exciting time to be a park operator in Colorado.

“New benefits have been added, and more are coming. A few of the benefits are ‘pay to play’ options, and several of those were used as challenge prizes during the social. 2016 is shaping up to be a year of transition and growth, and those who were at the conference feel that 2017 will bring even more growth,” said Arlington.