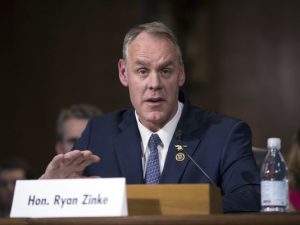 Interior Secretary Ryan Zinke is moving forward with a plan to relocate thousands of federal employees across the country as part a major reorganization that aims to put the department’s resources closer to the national parks and other public lands that it manages.

The department has included $18 million for the reorganization in the budget request that it sent to Congress on Monday (Feb. 13), according to U.S. Today.

The proposal will be forwarded in the next couple of weeks to the nation’s governors. Other details will be made public during congressional hearings on the department’s proposed $11.7 billion budget, Zinke told reporters earlier this week.

Zinke argues the restructuring, which is expected to begin this year, is needed to cut red tape and better manage the natural resources and cultural heritage sites the department is charged with protecting and to preserve them for future generations.

“It’s time to look 100 years into the future to make sure we are organized to address the challenges we know are going to occur,” he said.

The Interior Department manages 500 million acres of public land, a fifth of the total surface area of the United States. Of that total, some 85 million acres are part of the National Park Service.

The proposal would divide the country into 13 regions, the boundaries of which would be based upon watersheds and geographic basins rather than by individual states. Employees in some key agencies within the department, such as the Bureau of Land Management and the Bureau of Reclamation, could be relocated to the western United States to bring them closer to the resources they are tasked with managing.

The goal, Zinke said, is to place an individual park or asset in one region, which would it easier for employees to work together and avoid some of the management headaches that can occur when more than one federal agency is involved. Right now, for example, a salmon stream located near a lock or dam could fall under the jurisdiction of multiple federal agencies.

To carry out his vision, Zinke will need the approval of Congress, which must sign off on the relocation of a large number of federal employees. So far, the proposal has gotten mixed reviews among lawmakers.

“Moving the Bureau of Land Management (BLM) to Colorado would bring the agency closer to the vast public lands we all cherish and share, and that is a good thing,” said Rep. Jared Polis, D-Colo. “We have a strong and growing outdoor and recreation industry across our state that relies on public lands that helps make Colorado an excellent candidate for the new BLM headquarters.”