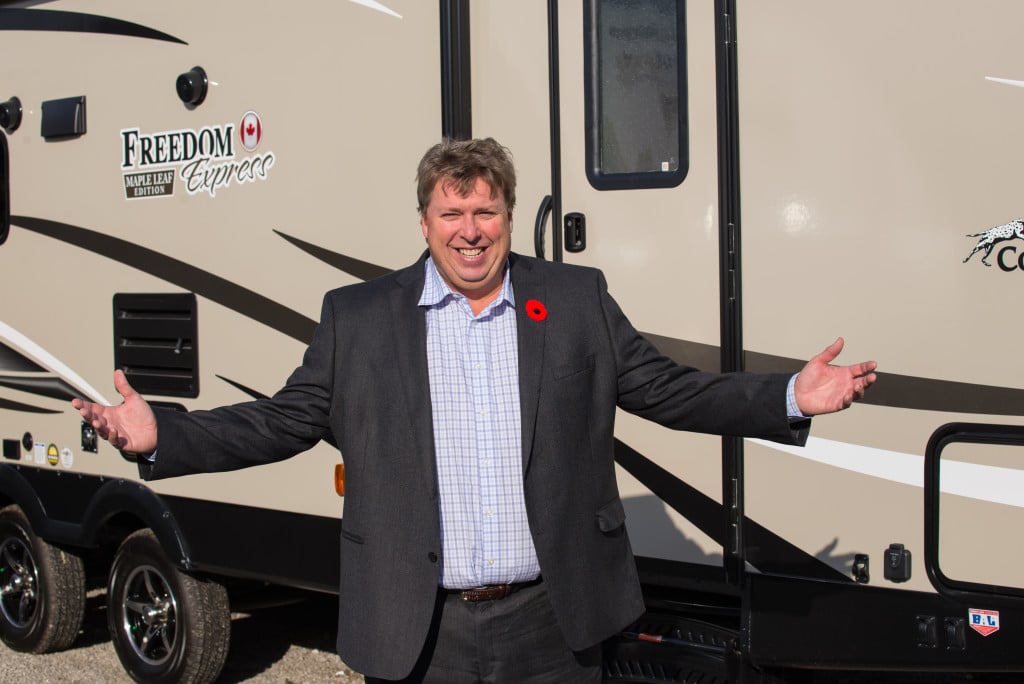 Shane Devenish is in a position to have an unusually comprehensive perspective of what’s happening across North America, both in the RV and campground businesses.

It’s a unique combination of posts that Devenish has held since 2016, when Maryse Cattelier unexpectedly resigned her position as head of the Canadian Camping and RV Council. It was at this time that CCRVC’s board asked Devenish to fill in for Cattelier on an interim basis until a replacement could be found.

The fact that the Canadian Camping and RV Council asked Devenish to step into their top leadership position not only highlights the depth of Devenish’s experience in both the RV and campground industries, but the very high levels of interaction between Canada’s top RV and campground associations on an ongoing basis.

“The feeling is, we are better when we all get in the same canoe and row the same way,” Devenish said.

“I think it’s a tremendous advantage to our industry up here,” Devenish said. “At least 10 times a year, we have the prime opportunity to share what’s going on in our respective markets with each other and to see what is needed to make it better for everybody individually and collectively. As an industry, we are extremely proud of the fact that we have significant input into each of the other association mandates. It makes it a lot easier to discuss our respective opportunities and challenges when we are sitting down at the same table together.”

Devenish, for his part, has decades of experience in both the RV and campground businesses.

A native of Mississauga, Ontario, Devenish initially attended college with the idea of becoming a Public Accountant. He landed his first job with ITT Commercial Finance in Toronto in 1985 as an inventory floorplan checker that took him to RV, motorcycle, marine and snowmobile dealers throughout eastern and northern Ontario. When ITT CMF specialized its divisions, he started working exclusively in the RV industry in 1989.

“I was driving 10,000 kilometers a month. My furthest account was in Timmins, Ontario, which was about an 8- to 10- hour drive away from my home at the time. In the wintertime, it was not a real pleasant drive with our winters, and in the summertime, you had to watch out for moose on the road!”

But over the years, Devenish worked his way up the career ladder in RV finance at ITT Commercial Finance, Deutsche Financial Services and then other different financial institutions that included some of the biggest names in the RV wholesale finance business.

His travels not only took him all over Ontario, but to northern Indiana where he developed many friendships with U.S.-based RV manufacturers. He has made countless drives to Elkhart, Ind., which is only about a 6.5-hour drive from Toronto.

“In 2000, I was promoted to AVP-Portfolio Manager for Recreational Vehicles at GE Distribution Finance, where our team managed $500 million in assets for Canadian dealers that sold RVs and mobile homes,” he said. “Eventually, GE CDF was sold to Wells Fargo, which is a major finance source for the industry today”

Devenish’s work included opportunities to meet with owners and operators of campgrounds who were looking at selling park model RVs at their parks.

“Our group would do the credit reviews for private campgrounds to approve them for a floor plan finance line,” Devenish said, noting that the experience gave him a deep knowledge of the financial challenges facing Canadian campground operators.

“Canadian private campgrounds are very asset rich, but cash poor, for the most part,” he said. “Generally, their cash flow is only during four or five months due to our short season and they must budget accordingly.”

But the experience of working closely with RV dealers, manufacturers and campground operators has proved to be invaluable, Devenish said. “My career has allowed me to meet a lot of people on both sides of the border over the years,” he said, adding, “We have all grown up together in this industry and I am fortunate to have made so many great friends along the way.”

Devenish served as a director on the CRVA board since the early 1990s, just a few years after launching his career in the finance industry. He decided to make a career change in 2014 and took on the full-time job as CRVA president when Larry Boyd retired. It was just two years later when Maryse Cattelier unexpectedly resigned her position as head of the Canadian Camping and RV Council and Devenish was asked to run the campground council, too.

Over the past year, Devenish has been managing both associations through what has become one of the most challenging periods in history with the COVID-19 pandemic creating unprecedented economic disruption across North America, while prompting Canadian officials to close their borders.

The pandemic, of course, has also unleashed unprecedented consumer demand for RVs in Canada as well as a booming interest in camping, which is viewed as one of the safest ways to recreate and vacation during the pandemic, Devenish said.

Canadian RV dealers typically sell about one tenth of the RVs produced in North America each year, said Devenish, who has worked in a variety of roles with Canada’s RV industry for 35 years. However, “in the third quarter of 2020, we were less than 7%,” Devenish said, adding that he is at a loss to explain why unit shipments increased compared to 2019, yet during the same period Canada’s percentage of the overall market remained less than normal historic figures. 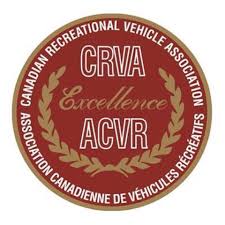 Canadian RV dealers were forced to close early in 2020 due to the pandemic, which set the stage for an intense summer season. “(Our RV dealers) were generally closed coast to coast until mid-May,” Devenish said, adding that most of the dealers were permitted to make curbside or outside sales and some service.

“When everybody was allowed to open finally, things started booming,” Devenish said. “It was extremely difficult for dealerships to get their retailed RVs ready for consumers after being virtually shut down for the extended period. Then they couldn’t get new replacement inventory fast enough!”

“The Canadian RV and Camping Industry have concerns about 2021,” Devenish said. “Our dealer inventory shelves are pretty bare and we’re very concerned about getting inventory levels up to a certain point where our dealers can be successful next year.”

The good news, however, is that many of Canada’s RV dealers have sold their aging inventory.

“2020 was a good year for dealers to get rid of their older RVs because of the lack of supply, but dealers had limited time to sell their units. Meanwhile, you had consumers clamoring to buy an RV and get outside. All of our dealers were literally running ragged,” he explained.

During the first half of 2020, Devenish and his team had their hands full working with Canada’s provincial campground associations to help create COVID-19 health protocols for campgrounds. “The Camping and RV Council worked directly with most of our member provinces and their health departments,” Devenish said.

There are just over 2,400 private campgrounds in Canada, and the Canadian Camping and RV Council has more than 1,500 members, Devenish said, so the association faced extraordinary pressure to help develop the protocols that could enable them to open as early as possible and have a successful camping season.

Canada’s campground operators experienced exceptionally strong demand in 2020, with seasonal campgrounds performing better than transient ones. One big exception, Devenish said, involved Canada’s Atlantic Provinces, which refused to allow travelers from other Canadian provinces or the U.S without self-quarantining for 14 days.

The “Atlantic Bubble” was established in Canada when New Brunswick, Nova Scotia, Prince Edward Island and Newfoundland got together to try to keep their residents safe during the pandemic. 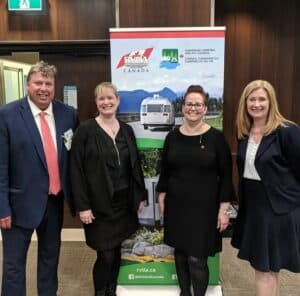 “The Atlantic Provinces did not have nearly the number of COVID cases as other areas in Canada,” Devenish said. “So, to make the best of a bad situation, they said, ‘Why don’t we encourage travel amongst us?’ But as a result, most private campgrounds in the region were down from last year, having lost business from the rest of Canada and, more importantly, they lost travelers from the U.S.”

Saskatchewan also prohibited travelers from other provinces and the U.S., so their campgrounds also suffered a loss of business, Devenish said. However, “other provinces were significantly up over last year. British Columbia, Alberta, Manitoba and Ontario did very well,” he said.

Even Quebec bounced back after initially having to shut down in late spring because it had too many COVID cases. “Quebec finally got going early in June. Although they were a month behind, we are hearing that they still ended up being over last year’s figures,” Devenish said.

A challenge of a different sort involves Canada’s continuing border closure, which has not only prevented American RV and camping enthusiasts from visiting Canada, but made it a lot harder for Canada’s estimated 500,000 snowbirds to make their annual trip south to U.S. sunbelt areas.

“What we’re seeing now is the emergence of a few companies that will pick up your truck or RV in Canada and drop it across the border. So, you can fly over the border, which is weirdly still allowed, pick up your unit and travel south from there,” Devenish said.

The numbers of Canadians doing this are quite small, however, according to U.S. park operators. Meanwhile, Devenish is hopeful that the worst of the pandemic is behind us and that the economy will gradually improve as people are vaccinated and restrictions are gradually lifted.

“There is a real feeling of optimism for the Canadian RV and camping industry in 2021,” he said. “Although I would expect to see some form of restrictions for a good part of the year in 2021, we just want to see the end of the pandemic and will follow whatever rules are put in place.

“Canadians pretty much wear masks coast to coast up here. It’s certainly not as political as what we have been seeing in the U.S. and we hope that we can control the spread of the virus by doing so. We should have the confidence of the Canadian government that camping is a safe way to social distance after successfully ending the year. The government has agreed with our rules and regulations that we developed this year and we should be able to take that collaboration into next year’s camping season. We have proved that we can operate in a way that ensures a safe and healthy experience for our owners and their campers.”

Devenish said he is not aware of any COVID-19 outbreaks at any Canadian campground, a situation that bodes well for the future. “I think everybody is anxious to get back to normal,” he said. “But it’s a lot easier to have rules in place and then work to relax them as you go.”