Chequamegon-Nicolet Could Take Decade To Recover 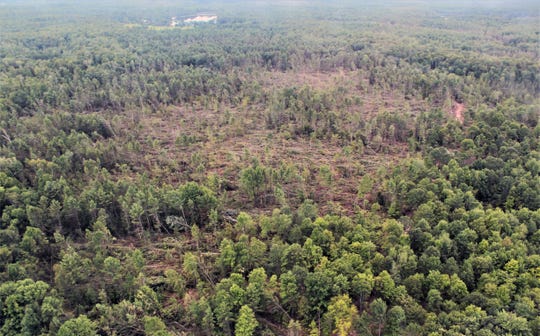 An aerial view of damage to the Chequamegon-Nicolet National Forest west of Highway 32, about four miles south of the town of Lakewood in Oconto County in northern Wisconsin.

When dawn came July 20, residents of northern Wisconsin counties found a changed land: hundreds of thousands of trees leveled or twisted by 100-mph winds, according to the Journal Sentinel.

“You walked out the next morning and just stood there,” said Carla Van Camp, town chair in the Oconto County community of Townsend. “My grandchildren will never see the beauty that we lost in that one night.”

But future generations may well hear about the 2019 derecho, the powerful storm that swept across northern Wisconsin at dusk one summer night, jack-hammering forests with massive downdrafts known as macrobursts.

Their devastation remains topic No. 1 across Oconto and Langlade counties. As repairs and cleanups continue three months later, officials who manage federal, state and county forests still labor to grasp the extent of damage. The U.S. Forest Service estimates that at least 63,000 acres of the Chequamegon-Nicolet National Forest were affected — a land area larger than the city of Milwaukee.

That impact doesn’t include blowdowns in state and county forests in the area, all of which have sent timber and pulpwood prices tumbling due to oversupply, taxing the ability of forest managers to get salvage wood to market before it spoils.

In early August, the state Department of Natural Resources, using initial field and aerial surveys, pegged the damage at more than 250,000 acres — that’s 390 square miles — including 14,577 acres of state land and 53,647 acres of private land open for public recreation.

Barron and Polk counties in northwest Wisconsin were also badly hit, with spotty storm damage in Wood, Portage and Waupaca counties west of Green Bay. For the U.S. Forest Service, which manages a hospitality business as well as more than 360,000 acres of forest, the first duty was to free people trapped in its campgrounds. The storm hit during the busiest season. At the popular Boot Lake campground, trees fell around people camping in tents and RVs. This month, debris including flattened tents still lay around the campground.

Mike Brown, a Forest Service district ranger, and Brandt, an assistant ranger, led a visitor through the campground, pointing out places falling trees nearly hit parked vehicles. They remain amazed no one was hurt. It took the service a day to cut a route up to a tower on Archibald Lake, enabling it to restore radio communications. generators provided the only available power.