By: Woodall's Campground Management|Published on: May 24, 2012|Categories: Industry News| 0 comments 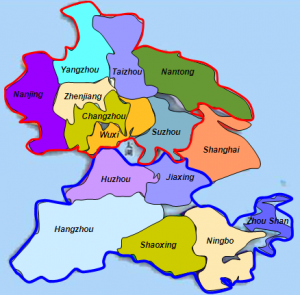 Some 400 to 500 recreational vehicle campgrounds will be built in Shanghai and the other 20-plus cities in the Yangtze River Delta Region by the end of 2020, according to a tourism development plan.

Tourism authorities aim to turn potential consumption in the RV market into real consumer behavior by mapping out the plan, said Wang Jianming, an official with the Shanghai Tourism Administration who helped work out the scheme. The plan has passed experts’ review and is expected to be officially launched in the second half of this year, English.EastDay.com reported.

About 20 of the campgrounds will be in Shanghai, according to Wang. Most will be built in suburban areas like Songjiang, Qingpu and Jinshan districts as well as near the future Shanghai Disneyland in the Pudong New Area.

With the emergence of the market, a number of cities in China, such as Beijing and Suzhou, have already constructed campgrounds. But there is no such campground in Shanghai.

“Shortage of campgrounds and specific routes have hindered its development in Shanghai, and it still takes some time for people to receive the relatively new type of tourism concept,” Wang said.

Shanghai’s scarce land resources and long approval procedure are part of the reason for the shortage, he said.

Most of those who own recreational vehicles in Shanghai are business people, athletes and entertainment stars. Wang estimates the figure to be in the hundreds.

Five tourism routes specially targeting RV users will be explored, according to the scheme. They will include tours around Hangzhou Bay and Taihu Lake.

Authorities estimate that an RV tour market valued at more than 10 billion yuan (US$1.6 billion) will gradually form in China over the next decade, including 3 million to 5.5 million consumers in the Yangtze River Delta Region.

Jing Zonghua takes charge of the Shanghai branch of the CRVC (Centech RVing Club), a Beijing-based recreational vehicle seller and rental service. He said the company’s business is not good in Shanghai.

“The market lacks recognition and attention in the city,” Jing said.

Shanghainese are prudent about purchasing such large vehicles, and the shortage of parking spaces is a problem, he said. Vehicle prices at his firm range between $66,000 and $110,000. It has six vehicles for rent but sometimes none of them is on the road.

Most campgrounds with power and water hook-ups for RVs also include facilities such as horse-riding spots and amusement parks. Jing said if developers do business only in recreational vehicle parking, they will fail. He said there is a wide range of facilities and service levels of RV campgrounds, as there is no standard in China.