Editor’s Note: The following story first appeared in CNNGo and is an overview of the status of the RV and RV parks in China at the present time. This industry is making quantum leaps in the sale of RVs and their use across the nation. The story was written by CNNGo Shanghai editor Tracy You, who is a bilingual culture and lifestyle journalist based in Shanghai. She’s a fan of history, British TV and Wii Guitar Hero.

Jing Xinghua, a 33-year-old Xinjiang native, first saw a recreational vehicle (RV) in 2009 during a trip to Chengdu in southwest China.

He was immediately engrossed by a vehicle that not only had a steering wheel, but also a bed, a galley and most of the accoutrements of a mini-home.

“I asked the driver to give me a tour of the RV,” Jing recalls. “This was the lifestyle I wanted, the sense of freedom.”

Jing was hooked. But he didn’t end up purchasing one RV.

The organization is affiliated with Zhong Tian Xing in Beijing, one of the largest RV manufacturers and leasing companies in China. Its core business is leasing RVs and organizing RV road trips.

“There was no such organization in Shanghai, so I think there is an opportunity,” explains Jing, who started the club three months ago. The 10 RVs he bought form the basis of his fledgling company’s fleet.

Jing says the RV business first came to China around 2001, but development has been slow due to high costs, legal issues and insufficient infrastructure. 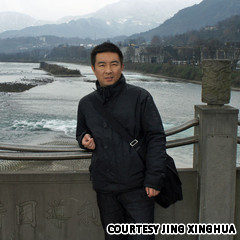 Zhong Tian Xing broke even for the first time in 2011, 10 years after it was established.

Many Chinese were introduced to RVs by “Be There or Be Square”, a hugely popular Chinese film that scored big at the box office in 1999.

The film’s hero, Liu Yuan played by Ge You, is a Beijinger who lives in an RV in Los Angeles and makes money from whatever menial jobs he can land.

“[Living in an RV] is a lifestyle, it’s hard to explain it to you,” Liu tells the film’s heroine, who is shocked, along with many in the audience, to discover that Liu lives in a car.

Some 13 years later, experienced and affluent Chinese road trippers long for their own RVs (literally “house cars” in Mandarin) in search of that “sense of freedom” when traveling.

Industry officials estimate that China’s RV market will generate more than RMB 10 billion (US$1.5 billion) in the coming decade.

“People are indeed very curious about RVs,” says Jing. “It’s a very new thing in China. People want to experience it and see if they like it.”

Traveling in RVs is a very new thing in China. People want to experience it and see if they like it.

According to Jing, Chinese drive RVs rather than caravans (which are hitched to the back of another vehicle), because the Chinese government doesn’t issue license plates for caravans.

Most RVs are less than six meters long and most travelers rent them for leisure trips and barbecues with friends.

“RV tourism is more popular in northern China because road conditions are more suitable, especially the route from Beijing to Inner Mongolia toward China’s border,” says Jing. “People can stop whenever they want and enjoy the grassland.”

In the south, travelers tend to avoid RVs, according to Jing, because “all the sights are densely located and the tourist industry is very mature, so people don’t feel the need to travel with RVs.”

When taking annual salaries into consideration, RV travel is much more expensive in China than in the United States, says Jing. 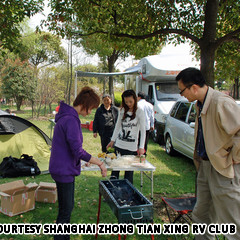 With the country’s booming motor industry, road tripping has become a cool new activity — some already say a “lifestyle” — for many Chinese.

Mainland China is crisscrossed by nearly 4 million kilometers of highway, but “there are only 30 or 40 places that can be deemed RV campgrounds,” according to Hu Jingmei, the China representative of the International Federation of Camping, Caravanning and Autocaravanning. Hu made her remarks during an interview with People’s Daily (interview in Mandarin only).

“Even these [existing campgrounds] do not have complete support facilities,” she said.

The shortage of campgrounds deters the development of RV tourism, as well as RV manufacture in China

“The shortage of campgrounds deters the development of RV tourism, as well as RV manufacture in China,” added Hu.

What’s more, Chinese RV travelers want campgrounds that are more than just somewhere to stop for the night.

Jing Xinghua says that apart from the basics — water, electricity, waste disposal — campgrounds must be located near tourist attractions and provide abundant entertainment, such as go-kart racing, bars and horseback riding.

“Otherwise people won’t come,” says Jing. “RVs have yet to become a part of our real life.”

Sensing an opportunity in the RV market, Chinese authorities are betting big on its future.

In 2009, the Chinese central government named RV tourism as an “industry to encourage.”

Shanghai Daily has reported that authorities are planning to build 400 to 500 campgrounds near the city and another 20-plus in the Yangtze River Delta region by the end of 2020. That’s roughly 60 new campgrounds per year.

“These campgrounds will be filled,” says Jing, “but it requires long-term planning.

“We are definitely confident in the future of China’s RV tourism.”