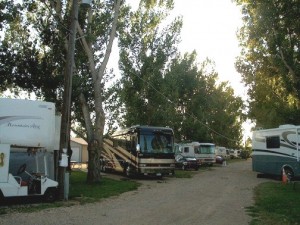 Some of the sites at the Greeley RV Park in Northern Colorado.

Weld County officials in Colorado north of Denver are not happy that an impromptu “man camp” has emerged just east of Greeley, saying the conglomeration of trailers and campers housing oil and gas workers is posing health and safety problems, The Denver Post reported.

“We are not interested in any land use that creates a man camp,” said County Commission Chairman Sean Conway. “To be clear, we do not allow man camps in Weld County.”

Man camps are makeshift villages of temporary housing for people — mostly men — who work in nearby oil and gas fields. Many arise in states with healthy oil and gas industries, including Texas, Louisiana and North Dakota.

Weld County is joining that oil and gas club, mainly due to the massive Niobrara shale formation, which stretches from southwest Weld into Wyoming and east to Nebraska.

Conway said the owner of the Greeley RV Park, south of and adjacent to Colorado 34, decided to rent out RVs to men looking for housing, a violation of code.

The county found out about it when a septic tank at the RV park began overflowing, causing an emergency health risk, Conway said.

The septic tank was capped and a company is now pumping the sewer water daily and taking it to a licensed facility, he said.

The RV park’s owner now faces a May 2 hearing for a decision on whether the permit to operate the site should be revoked.

The county says the park has committed several planning and health violations, and it is requiring the owner to connect to a major sewer line that is within 400 feet of the site.

To hook up to the sewer line, the RV park must be annexed into the city of Greeley, which the owner says would be too costly.

Park owner Marlin Ness couldn’t be reached for comment last week. But Ness told the commissioners that he could be driven out of business trying to comply with city regulations.

The sprawling camp has about 11 modular trailers which each house six to 10 men. There are also about 36 smaller coaches housing oil and gas workers.

Trucks with Texas, Utah and Colorado license plates park next to the trailers while graders, front end loaders and ready-to-be-laid pipe surround the site. Nobody responded to knocks on the trailer doors last week.

Conway said the county is not discouraging oil and gas company employees from working and living in Weld County. But, he said, there is plenty of housing stock available for those who want to rent or buy.

A man camp presents just too many potential health and safety problems, Conway said. “I just don’t believe this (a man camp) is in the best interests of Weld County residents,” he said.