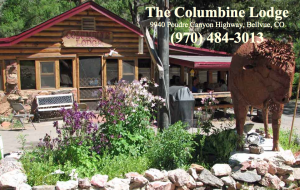 Wildfires spoiled a month of business at Columbine Lodge but did not dampen the spirits of its owners.

If you call Columbine Lodge in Poudre Canyon near Bellvue, Colo., and get the voicemail, you’ll hear the voice of Becky Lunsford thanking firefighters who fought back the Hewlett Gulch and High Park wildfires, saving the campground she and her husband purchased five years ago. Then you’ll hear something a bit less expected.

While campfires aren’t permitted at the two-acre site, nestled in Poudre Park along the river, campers are encouraged to bring their headlamps, flashlights and, well, anything that makes bright the night sky as long as it doesn’t involve flames, The Coloradoan, Fort Collins, reported.

“I told people: ‘We’re not having a fire in honor of the fire … so bring all kinds of lights,’” Lunsford told people returning to the campground for the first time this weekend.

And listen they did, flashing neon glow sticks and lighted hula hoops this past Friday, Saturday and Sunday.

Shuttered for three weeks starting June 9 — the day the High Park Fire broke out — Columbine Lodge stood empty. Its 16 rental properties were without tenants, its campground quiet without outdoor inhabitants and its food melting or rotting without electricity powering refrigerators in the main store.

Chocolate and caramel and vanilla ice cream oozed from a drainage valve on a cooler and onto the floor. It took time, some good old fashioned elbow grease and a putty knife in the hands of Becky’s husband, Roger, to clean that one mess.

It took 10 days to get the store ready for customers again. But even still, they’re slow to return.

“It’s devastating for businesses in the Poudre Canyon,” Roger Lunsford said of the fires’ effects, the still-blackened river rushing behind him at the campground situated just off Colorado Highway 14.

Prime months for Columbine Lodge are June, July and August, drawing locals and recreationists from around the country. The Hewlett Gulch fire in May took at least a week of business, Becky Lunsford said, and the High Park Fire stole three.

Even still, the Lunsfords aren’t complaining. They’re just doing what they can to make do — this included raising the price of weekend camping to $20 per person.

“At least we only lost one (month),” Roger Lunsford said. “Hopefully, we can salvage the others.”

The couple lost thousands of dollars in inventory from the store and money in rent. Seven tenants packed up and moved out, terrified of the fire’s wrath.

And drive-by business — once frequent and fast — has dragged since the lodge reopened. But the weekend camping turnout, which drew a full crowd each night, is promising.

“That was really good,” Becky Lunsford said. “That gave me a lot of confidence.”

Other Campgrounds’ Business Picking Up

Activity also picked up this weekend at a variety of campgrounds in the Canyon Lakes Ranger District.

“The lower canyon was the busiest that we have had it since we started having fires,” said Reghan Cloudman, spokeswoman for the Arapaho and Roosevelt national forests.

“But we still do have some areas in that lower canyon that are closed,” she said, “and we’ve definitely seen a little bit lower use in some of those areas.

She didn’t have exact numbers but said campground attendance is “a little bit less than average.”

Closures are in effect until rehabilitation work is completed and include some campgrounds, trails and Forest Service roads at the following sites: Young Gulch Trail, Bennett Creek picnic sites, Old Flowers Road, Diamond Rock picnic area, Hewlett Gulch Trail and five sites at the Mountain Park Campground, among others.

There are about 50 other sites open in the Mountain Park Campground, Cloudman said. And people are eager as always to get into the mountains.

“While we’re not filling up the Poudre areas, (rangers are) still getting a lot of calls about recreating,” she said.