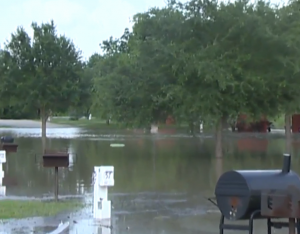 With word late Monday night that a flood was coming, Katay quickly began moving guests onto higher ground. Some campers were relocated to a nearby Walmart, while others gave up their spaces for less mobile guests.

“This is only the second time in two years that we’ve had water up in the campground and have had to evacuate,” said Katay. Yet even between looking after his guests’ safety, tending the campsite and monitoring river conditions, Katay remained upbeat. “I think it’s just mother nature. All you can do is roll with the punches.”

A flood warning is in effect for the Colorado River — the one in Texas, not the more famous Colorado River — in Fayette and Bastrop counties through this evening (Wednesday, May 27), according to the National Weather Service. The river is expected to continue to rise through the evening.

For the full story and video of the flooding, click here.