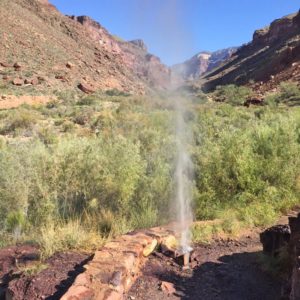 This photo is from Grand Canyon National Park, where a pipeline broke and was spewing water à la Old Faithful. As of last September, Grand Canyon had $329 million in deferred maintenance costs.

Editor’s Note: This story appeared in the magazine Outside and was written by J. Weston Phippen.

Operating our parks is expensive. They’re not moneymaking machines (despite Secretary of Interior Ryan Zinke’s desire to make them so). They cost a lot to manage, and the current National Park Service (NPS) maintenance backlog is at $11.6 billion, a figure that gets bandied about quite a bit and can seem pretty overwhelming. But half of that number is actually money needed to repair some 5,500 miles of roads in our park system.

When you really drill down and only include repairs considered “critical” to running the parks—things like functioning bathrooms or campground and hiking trail maintenance—the figure is much more manageable, at $3.5 billion.

So, $3.5 billion? Sounds like chump change to the feds. Up until recently, the federal government was spending $60 billion a year to maintain outdated tech and computers that still ran on floppy disks—granted, some of that equipment operated our nukes. But consider the yearly report published by Senator John McCain’s office that rounds up dubious spending.

In 2015, the report highlighted $294 billion the government gave to programs it was no longer authorized to fund, like researching the bomb-sniffing capabilities of elephants, nearly half a million dollars on a dog-bite prevention website, and—seriously—$387,000 for a National Institutes of Health grant to study the effects of Swedish massages on rabbits.

The government spends a lot of our tax money on things of questionable need. Our public lands, however, are only becoming more loved, more used, and in dire need of repair. Thanks to some photos provided by the National Parks Conservation Association, we got a peek at what the maintenance backlog really looks like.

To take a look at more pictures click here.