By: Woodall's Campground Management|Published on: May 15, 2012|Categories: Industry News| 0 comments 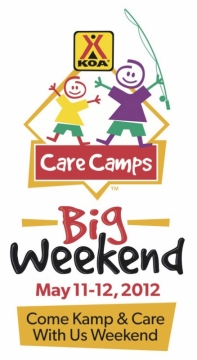 Kampgrounds of America Inc.’s (KOA) popular Come Kamp &Care With Us Weekend May 11-12 hosted nearly 10 percent more campers this year than in 2011, the company reported.

“A combination of great weather, stabilizing fuel prices and fun event planning by our campground owners really brought out the campers,” said Mike Gast, KOA’s vice president of communications. “Of course, it’s the official kickoff to KOA’s 50th birthday, so that didn’t hurt, either.”

Nearly 400 of the 480 KOA campgrounds in North America participated in the ninth annual event, where campers received a free night of camping last Saturday if they stayed as paying guests on Friday.

Donations are still being counted from this year’s fundraising efforts, but last year, KOA campers helped raise more than $500,000 to benefit the charity.

“Come Kamp & Care With Us Weekend isn’t just the official start of the summer camping season,” said Gast, “It’s also a pretty good indicator of how things might look for the rest of the summer.”

Advanced reservations for the summer months at KOA are running ahead of last year. The increase in KOA’s inventory of Deluxe Cabins, which feature full bathrooms and kitchens, is also fueling increased camping by bringing in new campers who value the comforts Deluxe Cabins offer.

“The public’s desire to reconnect to the outdoors is certainly increasing,” Gast said. “Camping is the perfect, affordable answer.”