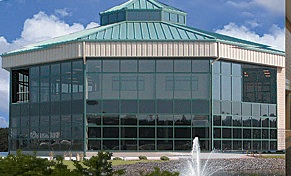 Leaders from the RV/MH Hall of Fame in Elkhart, Ind., wanted to develop a lot east of the building using Tax Increment Financing, or TIF, district funds. They argued the expansion would attract more bookings and increase profits, WSBT-TV, South Bend, reported.

The RV Hall of Fame was ready to start an ambitious expansion project. But financial troubles put those plans on hold.

Tom McNulty, the Hall’s executive director, did not want to talk to WSBT News before his scheduled appearance with the redevelopment commission on Thursday afternoon (May 26).

But McNulty’s plan was simple: scale down the original expansion just east of the Hall.

McNulty’s pitch is an $800,000 investment which includes an outdoor exhibit space, complete with the addition of lighting fixtures, fountains, landscaping and other improvements.

McNulty believes the expansion would make it more successful, and ultimately more profitable.

But there was a catch…

“The bottom line is, is this a good use of TIF funds?” asked Mike Yoder, Elkhart County commissioner.

The non-profit wanted public funds to pay for the investment. Without a sound business plan or details on how the Hall would reduce debt or increase profits, the commissioners said they had no choice but to pump the brakes.

“I think the lack of a very clear, detailed plan is what’s holding this up,” said Yoder.

The redevelopment commission will allow the Hall to submit their proposal again, if the plan includes how the Hall will decrease debt.