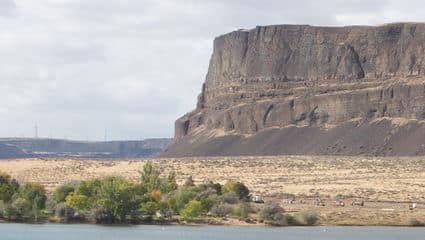 Part of the campground and construction equipment being used to build new campsites are dwarfed by Steamboat Rock. – Scott Hunter photo

The construction of additional campsites at Washington’s Steamboat Rock has resumed after a nearly four-year delay, according to The Star.

The construction of 30 full-hookup RV sites at what will be called Cove Loop at Steamboat Rock State Park is on track to be finished in February, with the sites likely to be ready for campers in late spring or early summer next year, according to Dennis Felton, area manager for state parks in the Coulee Corridor, including Steamboat Rock, Sun Lakes-Dry Falls, and Potholes.

A full-service restroom with four-showers is also being constructed in the area.

The project began in fall of 2016 and then was delayed 22 days after construction had started. The Bureau of Reclamation, which owns the land, and the Colville Tribes needed to come to an agreement for a cultural resources plan in their dealings with one another, Felton explained.

Although a full resource survey had already been done, since construction resumed in June 2020, archaeologists are required to be on-site to watch over any additional digging.

Felton said that cultural resources haven’t been found so far, just a lot of sand.

The delay caused additional costs related to hauling the machinery away, loss of work, and an increase in the cost of materials since 2016.

Data from the Washington State Parks and Recreation Commission shows that use is up at the park in recent years.