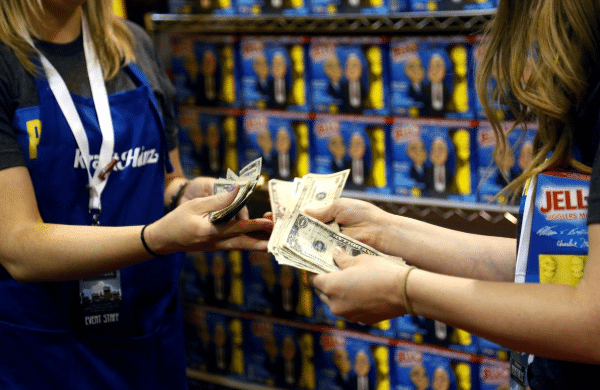 Workers at the Kraft Heinz booth count money at the shareholder shopping day as part of the Berkshire Hathaway annual meeting weekend in Omaha, Neb.

U.S. consumer confidence ebbed in September as an escalation in trade tensions fanned concerns about business and labor market conditions, a potentially worrying signal for consumer spending, which has been driving the economy.

Reuters reported the relatively downbeat survey from the Conference Board mirrors other confidence surveys and could renew financial market fears of a recession that had been assuaged somewhat by strong August retail sales, industrial production and housing data.

The Federal Reserve last week cut interest rates for the second time to offset the impact on the economy from the year-long trade war between the United States and China, and slowing global growth. The U.S. central bank lowered rates in July for the first time since 2008.

The longest economic expansion on record, now in its 11th year, is mostly being sustained by consumer spending, via the lowest unemployment rate in nearly 50 years. But there have been fears the U.S.-China trade war, which has weighed on business investment and manufacturing, could slam the brakes on consumer spending.