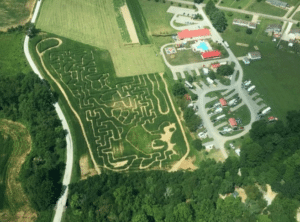 The corn maze at the Coshocton KOA.

The Friends of the Johnson-Humrickhouse Museum and the Coshocton Kampgrounds of America (KOA) in Coshocton, Ohio, will partner to hold a beer maze event from 2 to 8 p.m., Sept. 21, in McPeek’s Mighty Maze at the Coshocton KOA, according to the Times Reporter.

The maze will have eight beer samples hidden throughout. At the end of the maze, the event will include a food truck, live music and a cash bar.

Admission will include the maze, games, a beer pairing snack box and a souvenir beer mug.

General admission is for ages 21 and older only, but ages 18 and older may purchase designated driver tickets.