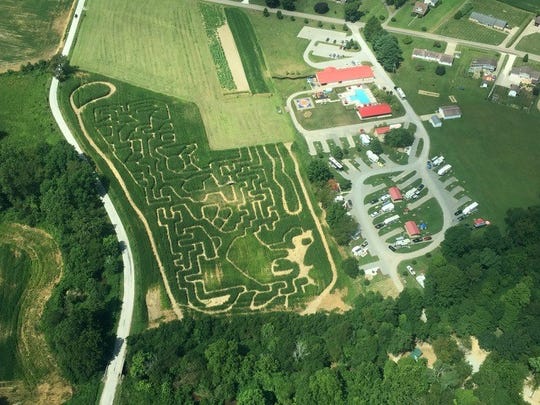 An overhead look at McPeek’s Mighty Corn Maze with an African Safari theme this fall. The maze is open Saturdays and Sundays until Oct. 27 at the Coshocton KOA on Ohio 10 in Coshocton, Ohio.

McPeek’s Mighty Maze at the Coshocton Kampgrounds of America (KOA) in Coshocton, Ohio, has returned for a fifth season with an African safari theme, and is open each weekend throughout the month of October, according to the Coshocton Tribune.

Owners Ryan and Camille McPeek said in a press release that one of the most common questions they still get from guests is how does one make a corn maze. They said it comes down to agriculture, technology and good old-fashioned hard work.

The maze creation starts in the middle of winter. The McPeeks pick a theme for the season and contact Maize Quest Corn Mazes in Pennsylvania, which specializes in creating spectacular corn maze experiences.

Maize Quest even has a professional maze designer, Dave Phillips, who designs a maze just for the McPeeks based on their ideas. Along with corn mazes, Phillips also creates maze books.

Each spring six acres of corn is planted in a field. However, it goes in a little differently than other fields. Farmer Brian Mason, from Pew Farms, dials back the planter population to only have about half as many plants as a typical corn field would have. He plants the field like normal but then when he’s done, he goes back and does it again.

This time he slides over 15 inches. This means there are twice as many rows of corn and they’re only 15 inches apart so you can’t easily see or walk through them.

The corn sprouts and grows like normal but sometime around July 4 the maze is created. The corn is just about knee high and still young, tender and easy to cut down.

Time Day, of Maize Quest, shows up with his tractor, rototiller and GPS unit. He loads Phillips’ maze into the GPS and sets out into the corn maze. It’s created after about four hours of work.

Day cuts about 60 corn mazes per year around the country and has even cut them in the middle of the night so he can get to the next maze by sunup.