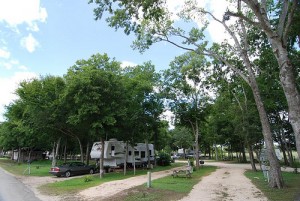 Some of the sites at Hill Shade RV Park in Gonzales, Texas.

Editor’s Note: Greg Little, publisher of The Gonzales Inquirer, located in Gonzales, Texas, east of San Antonio, wrote this detailed story about how a couple came to buy and develop their own RV park.

Sometimes, people just have to take a chance.

For Christine and Michael Moers, that chance was jumping into an entirely new occupation — RV park owners in Gonzales County.

“We are ‘get our hands in the dirt’ kind of people,” said Christine.

The couple were living in Blackwell, Okla., where Michael was a pastor at a church and Christine was a “full-time CEO of my home,” including raising five children. Two of the children are from natural birth and the other three are adopted.

“We were so unbelievably blessed,” she said of their lives.

Another factor in all of this was that Michael’s parents changed their careers in mid-stream. They went from the education profession to owning a motel in Rockport (located about 100 miles from Gonzales on the Gulf of Mexico). Because of various circumstances, Christine and the kids had been going to Rockport to help out with the motel. She said they learned Michael’s parents were in the business of helping people.

That, she said, is when they decided “we’re going to do something.”

Because of the connection to the motel business, she said they got out their computer and began looking online at various things, like campgrounds, motels and RV parks.

“Our goal, as a family, is to help other people,” she said.

The search led them to parkandplaces.com, a sort of online brokerage firm which lists things like RV parks which are for sale. The site is so private, they had no idea where the park was, only that it was in a seven-state area.

“It could have been in Nevada,” said Christine, who adds, “We were willing to go anywhere.”

They had not been to Gonzales County but made the trip. They were also very happy about the fact the park is located near their families. Both grew up in Texas so it came as a pleasant surprise to find out the location of their potential new home.

After visiting, they did some research about RV parks and what it would take to turn a park that was mostly residential into one which was generally for overnight visitors.

They looked at their budget and just about everything else and the decision was made — they were coming to Texas.

One of the first things they did was change the name of the park. It used to be called River Shade RV Park but they have since changed the name to Hill Shade RV Park. She said there is a River Shade in Seguin and they wanted their own identity.

So, they moved to Texas and changed the name of the park; now what?

It was just over a month before they got their first customer. That was a referral from the Gonzales Chamber of Commerce. In fact, they have joined the Luling, Gonzales and Seguin chambers of commerce.

Christine said her research indicated it would take up to two years for the park to really get going.

The park has 20 spots with full hookups. On Tuesday of last week, they had 14 RVs in the park. They had 15 one other night.

“We wanted it to be a community,” said Christine.

It appears that is happening pretty quickly as word spreads among the RV community about the place.

Hill Shade RV Park offers wireless Internet, full bathrooms and showers, laundry room, full hookups at every site, they are kid and pet friendly and there are more than 200 shade trees on the place.

“They set this place up perfectly,” said Christine of the previous owners.

She also said there is a boat launch just down the road and it’s just $5.

And then there’s that other bonus — Dr. Bob Williams, a weekly columnist for this newspaper and all-around crazy guy who lives just down the road.

Williams, she said, allows anyone who stays in the park to use his docks along the Guadalupe River.

“It is really nice of him to do that,” she said.

Of course, when you use the docks, you’ll also have to plan on a couple of hours while Dr. Bob sets your life straight, but it’s a small price to pay for river access.

Christine says they have met a wide variety of people since taking ownership of the park. There are people who work in oil fields, retired people, winter Texans, a Swedish couple in their 20s and just about everything else you can imagine.

Another very interesting thing which has happened is the fact they are going to host a group of RVers next week.

A friend of Christine’s in Oklahoma reads a blog about people who RV. The group, called nurvers.com, had their first gathering last year and were looking for a different place this year.

One blog conversation (“The Internet it everything these days,” said Christine.) led to another conversation which led to e-mails (is there an app for that?) which led to the group deciding to come to Gonzales County for their meeting.

Christine said they are excited this group is coming to their park.

Already, she said they have reservations for 12 RVs as well as other people who are going to camp in tents. She said the group has an entire schedule and will be doing everything from crocheting seminars to building to apps for iphones.

“They will do their own thing,” she said.

All in all, Christine said they are very happy to have found a home in Gonzales County and are looking forward to building their business even more and helping people enjoy life.