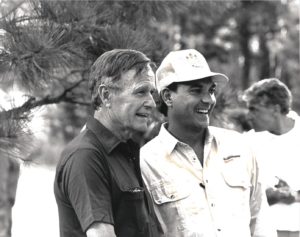 Editor’s Note: The following guest column was authored by Derrick Crandall, who has had a long and distinguished career in the outdoor recreation arena. Among other accomplishments, he is president of the Outdoor Recreation Roundtable, had served as president of the American Recreation Coalition (ARC) since 1981, is a counselor to the National Park Hospitality Association and is a member of the U.S. Department of the Interior’s “Made in America” Outdoor Recreation Advisory Committee where he also chairs its Subcommittee on Advancing Recreation Through Interior’s Reorganization.

During ceremonies at the U.S. Capitol, the Washington Cathedral and his hometown of Houston, Texas, George H.W. Bush was honored upon his passing last week (Dec. 6) for his leadership, patriotism and remarkable circle of friends. His love of boating and fishing and the great outdoors was referenced multiple times — as was his boat, Fidelity, a not-too-traditional “fishing boat” that was, in fact, a high powered, Cigarette-class offshore ride.

Not discussed was another anomaly: the left-handed president typically used fishing rods for right-handers simply inverted.

Most Americans — and certainly many in the RV community — may not appreciate today the full extent of the 41st U.S. president’s involvement in parks and outdoor recreation issues in general. So, it’s a good time both to stop and appreciate what a strong friend in the White House can mean for our industry and to commit to gaining that support in the days ahead. 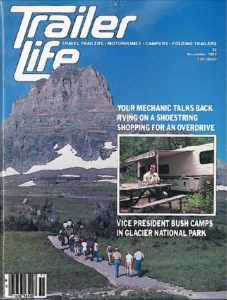 George H.W. Bush grew up spending plenty of time outdoors — hunting and fishing as if he realized early on that his intense lifestyle could benefit from some worthy recreational balance. When he became vice president in 1981, he opted to do just that and, in the process, set an example for the rest of nation. In fact, he chose to share his enjoyment of outdoor recreation in an article entitled “The Importance of Recreation in America.” His article appeared as a guest editorial in nearly a dozen magazines, reaching millions of recreation enthusiasts, recreation industry leaders and even frequent flyers. Publications carrying the article ranged from Snow Goer to Passages, Northwest Airlines’ inflight magazine

His article ended with these words: “…we have an opportunity as never before to create innovative partnerships between the public and private sectors. For recreationalists like you and me, that’s good news indeed.”

The vice president, spurred by the response to his article, then invited the American Recreation Coalition (ARC) and The Coleman Co. to help him employ recreational outings to build awareness of the healthy benefits of time spent outdoors along with the shared legacy of America’s parks and outdoor spaces. His first adventure in office was to Glacier National Park in Montana in the summer of 1983. U.S. Senator Alan Simpson and his wife accompanied the Bushes on that multiday trip, which produced great pictures that appeared in many publications including the cover of Trailer Life. George Bush signed the tent he and his wife used. Not generally known, by the way, is the fact that Barbara Bush replaced the air mattresses in that tent after the first night with mattresses borrowed from a nearby Western RV fifth wheel! 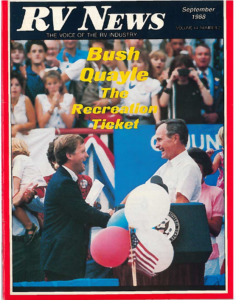 He even led volunteer efforts at urban units like D.C.’s Anacostia Park where he worked alongside industry leaders from KOA, Brunswick, Disney, Huffy, L.L. Bean, Bass Pro and more.

His role in signature conservation efforts included key support of the Wallop-Breaux Amendments to the Federal Aid in Sport Fish Restoration Act in 1984, adding hundreds of millions of dollars annually in recreational boating fuel taxes to a then-small federal assistance program. And he helped us back down OMB Director David Stockman who quickly sought to handcuff this giant achievement.

As president, he acted to create new and expanded public-private partnerships, including concessioner operations at national forest parks, and led efforts establishing the National Scenic Byways System and the Recreational Trails Program in 1991, legislation that also boosted funding for national park roads.

He played a role in expanding the Reagan-era Take Pride in America (TPIA) program fighting vandalism with allies like Clint Eastwood and honoring outdoor volunteers with TPIA and Points of Light recognition.

Bush’s support for outdoor recreation earned a full-page story in USA Today featuring a wonderful caricature, and he was honored in 1990 with the industry’s Sheldon Coleman Great Outdoors Award.

For those of us who spent time outdoors with Bush 41, though, the most intense memories include passionate conversations over early coffee around campfires. I recall his joy as a grandfather when Jeb’s son, George P., stepped out of an RV on the drive through Grand Teton National Park and the 8-year-old Florida boy saw his first big mountains.

Bass Pro Founder Johnny Morris shared posthumous memories with his millions of customers: “On behalf of all your fellow sportsmen and women, we thank you, President Bush, for being such a genuine ambassador for the great sport of fishing and for your steadfast commitment to fish and wildlife conservation!”

We can help make that happen.