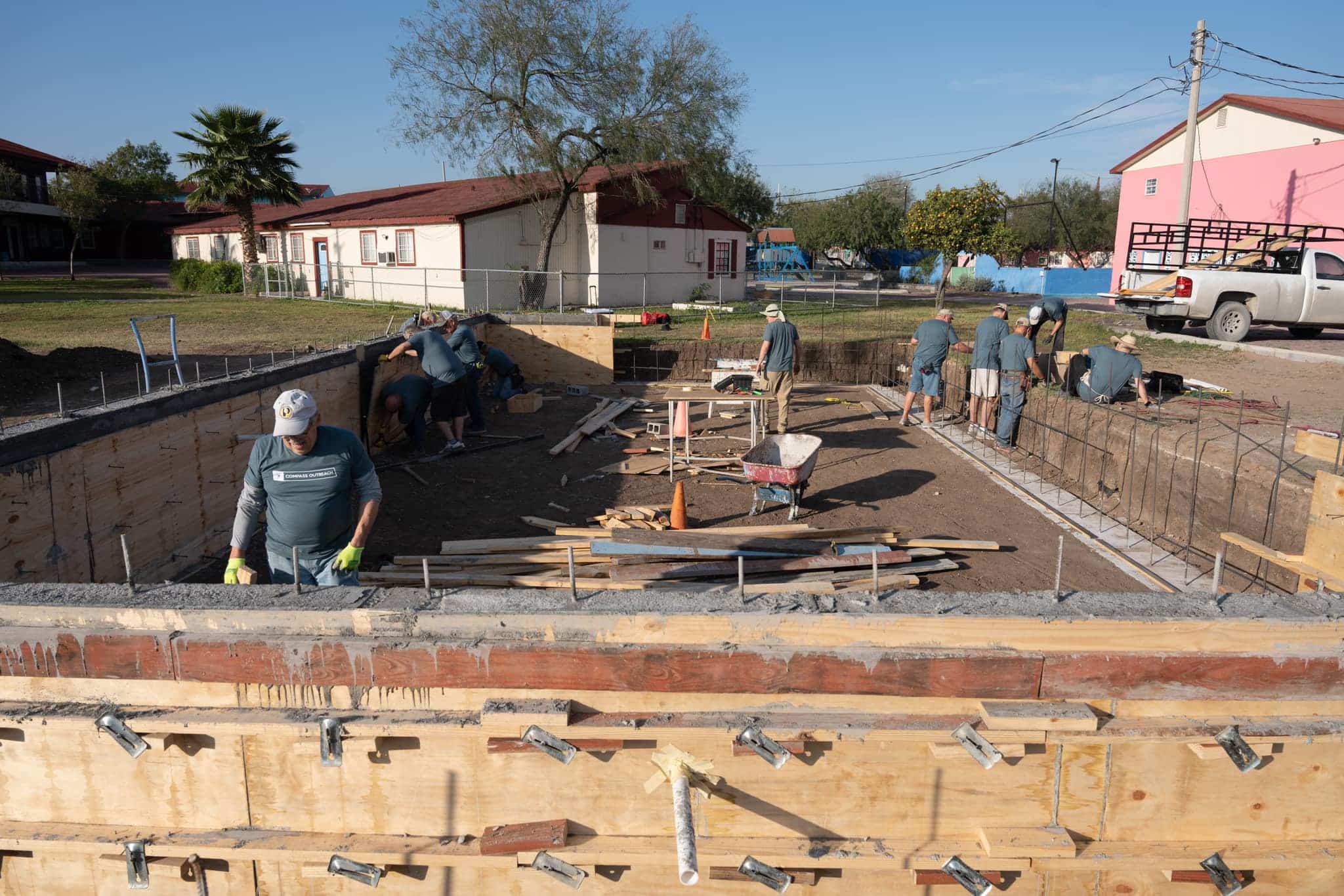 Volunteers with the Compass Church construction team built forms for a swimming pool at the Rio Bravo Children’s Home, which is expected to open in April. Photo courtesy of Ken Lenz

But every January, Moore takes a week away from the campground business to volunteer his electrical, plumbing and carpentry skills at the Rio Bravo Children’s Home, an orphanage and school in Reynosa, Mexico, which is just across the border from McAllen, Texas, roughly four hours south of San Antonio.

“It’s very rewarding work, which is why I look forward to this trip every year,” said Moore, a Mineola, Texas, resident and National Association of RV Park and Campgrounds (National ARVC) Executive Committee secretary who has volunteered on the annual construction trips for the past eight years.

The annual trips are organized by Colleyville, Texas-based Compass Church, while the orphanage and school are run by Rio Bravo Ministries, an independent nondenominational ministry based in Mission, Texas.

This year, Moore primarily worked on plumbing, electrical maintenance and roofing projects, though he also worked with students learning English and helped with food preparation during an afternoon carnival that took place on the Rio Bravo grounds that was attended by over 1,000 people from the local community in Reynosa.

Jeff Crider, a longtime campground industry publicist and writer for Woodall’s Campground Magazine, also joined Moore on the trip to Reynosa and helped with painting and roofing projects.

Moore and Crider also joined several volunteers on a special outreach visit to a walled Haitian refugee camp in Reynosa, which is run by Kaleo Ministries. The Compass team delivered enough chicken, hot dogs and ice cream for more than 100 refugees at the camp, which caters to refugees who are trying to enter the U.S. legally.

“It was a very moving experience for us to visit the Haitian refugee camp,” said Crider, who is fluent in Spanish and conversed with several refugees who spoke Spanish. 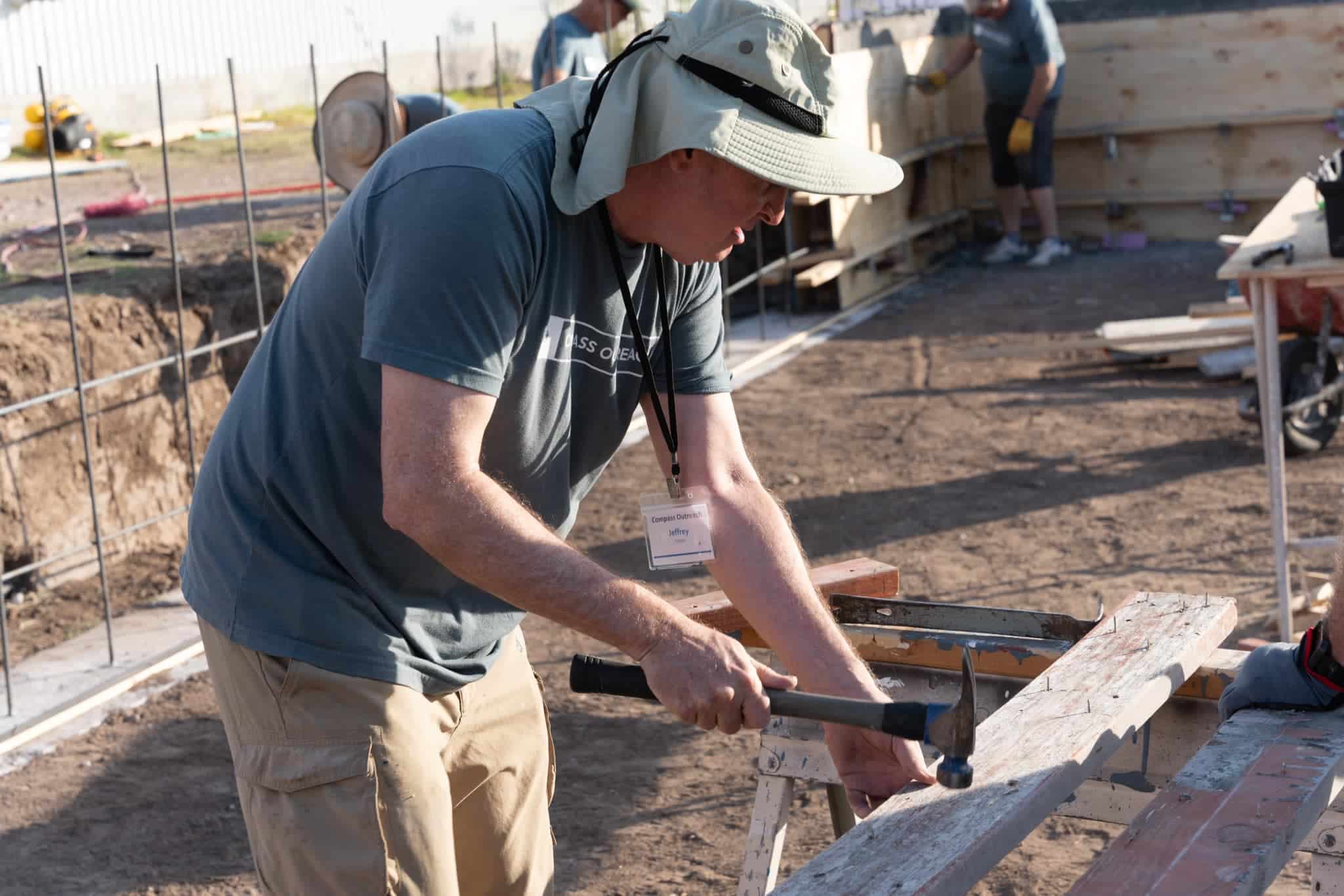 While Crider has volunteered for many years as an interpreter for U.S. doctors on IMAHelps medical missions across Central and South America, he said he particularly enjoyed having the opportunity to help Compass Church and the Rio Bravo Children’s Home with their outreach efforts to the Haitian refugee camp.

“While the refugees were grateful for the food, it was especially neat to be able to give them ice cream and to see the parents being able to take a break from thinking about the seriousness of their situation and enjoy a sweet treat with their children,” Crider said.

While Crider spoke with some of the refugees and interpreted for some of the Compass Church volunteers, Moore played with the kids, eliciting smiles and laughter from the children and their parents alike.

“It’s kind of overwhelming to be in the camp and to think that this is their situation, day in and day out,” Moore said. “It’s very sobering to see.”

The Haitian refugee camp, which is run by a former teacher from the Rio Bravo Children’s Home in Reynosa, is near the south side of the Rio Grande River.

“You can see into the U.S. from the area near the camp,” Moore said. “You can literally see freedom.”