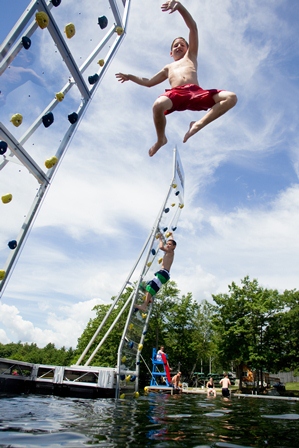 Since its first summer in 1922, Camp Modin in Maine’s Belgrade Lakes region has provided generations of children a dynamic recreational camp experience. This past summer it added a challenging water adventure like none other — a floating climbing wall.

“The climbing wall was a very exciting addition,” says Howard Salzberg, camp owner. “We had seen this AquaClimb product at a trade show and really liked the look of it. It was a climbing wall used primarily for pools. But we don’t have a pool. We have a waterfront and we knew our existing dock probably wouldn’t work with this product.”

“I’d been working with CRS for as long as I can remember. Our entire waterfront is made up of CRS products,” says Salzberg. “So I talked with Ron Romens, CRS president, and he assured us they could handle the challenge of where and how we could install the AquaClimb. It was the first of its kind.”

Being the first of its kind meant there were issues no one had dealt with before — things like a floating dock, the structural loads, water depth requirements and other safety concerns.

“These were important details well beyond what we could do,” says Salzberg. “CRS went to work and dealt with both the dock company and AquaClimb to develop a solution. They even brought in engineers to stamp the plans for approval before installation. There were a number of parties involved in the technical aspect of it and CRS coordinated them all.”

“The kids love it! It’s something they’ve never done before,” says Salzberg. “It’s a great addition. We haven’t had any safety issues and it has performed just as we expected.

“Our AquaClimb is unique. We’re always trying to add something to our program, something that’s a challenge. We have a climbing program on land, and we thought it would be fun to have one on water as well. The more activities we have, the more campers we can entertain and the more opportunities for those kids to have a meaningful camp experience,” says Salzberg.

With the success of Camp Modin’s AquaClimb project, Commercial Recreation Specialists  announced it is now the exclusive camp and campground supplier of AquaClimb.

CRS serves customers throughout the United States and the Caribbean. With over 40 years of combined industry experience, CRS not only supplies the highest quality equipment from a variety of sources, it also offers design, planning, installation and operations services. It provides a careful analysis of each client’s facility and business goals in order to achieve the best recreation solution possible. CRS delivers unparalleled industry knowledge and proven success in the commercial recreation market with clients including municipalities, schools, YMCAs, athletic facilities, sports venues, amusement parks, family entertainment centers, campgrounds, resorts, summer camps, zoos and other recreation venues.