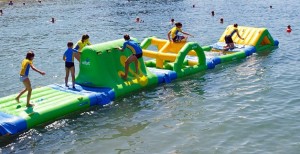 In partnership with Commercial Recreation Specialists (CRS), Graydon Pool in Ridgewood, N.J., hosted its first official Wibit tournament in late July, offering a way for patrons to beat the heat, as well as to spark renewed interest with local youth of all ages.

Utilizing the pool’s new Wibit Aquatrack, the “2012 Wibit 50-Meter Splash” featured teams of five participating in a relay race across the floating challenge course, according to a news release. Offering musical entertainment, a cook out, and prizes worth up to $200, the city’s goal was to engage not only the younger generation but to entice “big kids” from high school age on up to find the fun again at the local swimming pond.

“There hadn’t been much change over the last 50 years to Graydon pool,” explains Steve Diamond, who has been the pool’s director for the past two decades. “We didn’t really have anything for kids to do other than swim in the pond and jump off the diving board.”

Since the Wibit installation in 2011, Graydon Pool has seen significant change. “In the summer, Wibit sign-up lists fill quickly every day,” says Diamond. “We also have noticed more external community groups and out-of-town residents purchasing day passes to use the Wibit course, from day camps, to the local YMCA, and swim lesson groups…and the lifeguards love it just as much as the younger kids do!”

The Wibit 50-Meter Splash generated a lot of community interest, with registration sheets “flying out the door all month” according to Sean Martyn, the event’s coordinator. With the turnout a success, Martyn assures it will be the first of many annual relay and community Wibit events throughout the coming seasons.

Commercial Recreation Specialists is headquartered in Verona, Wis., has local representatives in New Jersey, and serves customers across the United States and the Caribbean.